‘The Freedom of Information request was refused on the basis that there was nothing on record as no meetings were held in that period and therefore there was also no record of attendance’ – Úna Doogue Aontú representative. 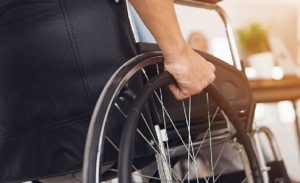 The Aontú party’s representative in the Portlaoise Municipal District Úna Doogue claims that Laois County Council (LCC) is not meeting its obligation on housing for people with disabilities.

In a strongly worded statement she criticised the council for “consistently failing in meeting its obligations under the National Housing Strategy for People with a Disability in Laois.”

Ms Doogue said: “Last November I secured details from the LCC Strategic Plan for Housing People with a Disability on foot of a Freedom of Information (FOI) request to obtain figures for the number of those with disability in Laois waiting on social housing, and the length of time applicants were waiting.

“The Strategic Plan stated that it’s evident there is a significant need for housing for people with disabilities in the county. The numbers at the time showed there were 70 people with a disability on the social housing list with LCC with some waiting more than 10 years.”

She said: “As a result the Independent Living Movement Ireland, ranked LCC at zero in a league table on the performance of local authorities across the country under the National Housing Strategy for People with a Disability.

“At the time I requested the Aontú leader, Deputy Peadar Tóibín to raise this in the Dáil where he spoke on two occasions about local authority waiting lists for housing for people with disabilities. He also referred to the numbers of people under aged 65 with a disability, the hidden homeless, living inappropriately in nursing homes due to lack of suitable accommodation.”

“In a further development,” Ms Doogue said, “a recent FOI request made on behalf of the Aontú party to LCC sought the minutes of the Housing and Steering Disability Group in the administrative area for 2019, 2020 and 2021 including the membership of the steering group for these years. A list of membership of the group and attendance at the meetings was also requested.

“The FOI request was refused on the basis that there was nothing on record as no meetings were held in that period and therefore there was also no record of attendance. It was noted that membership of the group is comprised of Laois County Council and the Health Service Executive. Quite interestingly, it was also noted in the response that a virtual meeting would then take place shortly although no date had been set.”