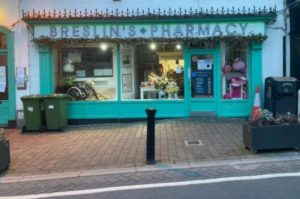 Breslin’s Pharmacy on Main Street, Portlaoise has relocated to the Parkside shopping centre on the Abbeyleix road

A BUSY Portlaoise pharmacy has said farewell to Main Street, after serving local customers for generations.

Breslin’s marked the end of an era on Saturday, as the front doors closed for the last time.

The front doors reopened today in a new store across town, as Breslin’s has relocated to a new unit at the Parkside Shopping Centre on the Abbeyleix road, beside O’Moore Park.

The shop in Main Street has been a pharmacy for generations, as Breslin’s took over what was then Gannon’s pharmacy in the mid-1990s on the retirement of Jim Gannon, whose father had also owned a chemist’s shop in the town.

With the departure of Breslin’s, nearby Hughes Pharmacy is the only remaining chemist’s shop on Main Street.

Within the past five years, the number of pharmacies on the street has dropped from four to one, following the takeover of both O’Loughlin’s and Adams by Chemco in Lyster Square. The Adams outlet closed due to the owner’s retirement.