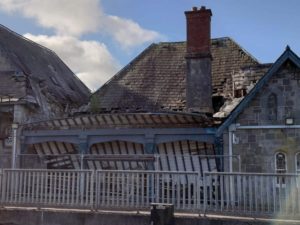 THE shocking condition of a historic railway station building in Laois has been condemned by a local senator, on the same day as Irish Rail splashes out on upgrades of first-class train carriages.

Senator Fiona O’Loughlin says there is local outrage, after a photograph of the current state of the 19th century station building in Portarlington was shared on social media.

The picture shows that the once impressive Victorian building is falling in on itself and has become a crumbling ruin.

The Fianna Fáil senator said today: “It is shocking to see such a beautiful building be let go to rack and ruin, not to mention from a health and safety aspect. The building does not look like it will stand up on its own much longer.”

However, Irish Rail says that it plans to restore the property and a planning exemption has already been secured to restore the roof and canopy structure.

In a statement responding to Senator O’Loughlin’s remarks, the company said: “Unfortunately, on 6 April last, some surrounding materials did fall inwards.  However, this does not materially affect the planned works and, subject to funding, it is hoped to carry these out in 2022.  As well as restoring the building, by bringing it into active use it will ensure it is secured and prevent issues of theft and vandalism in the future.”

Irish Rail pointed out that the disused building suffered vandalism and theft of “substantial heritage building fabric roofing lead” in 2015.

The company said: “At that time, we were still severely underfunded for infrastructure maintenance, including buildings, and our focus was on essential works in operational buildings only. Follow-up inspections of the building at that time resulted in temporary supports being placed on the canopy and roof structure.

“The building was completely blocked off from public access and, recognising the damage caused by the theft and vandalism, the supports were designed to ensure that any weakening of surrounding materials would fall inwards.”

The company said that a planning exemption has been secured from Laois County Council to restore the roof and canopy structure. A further full planning permission is being prepared for a change of use, as it is intended to bring the building back into use as a maintenance staff facility.

The station was built in 1850 in typical Victorian style, with an intricate latticework footbridge above the railway line.

Calling on Irish Rail to carry out urgent repairs, Senator O’Loughlin said: “Portarlington is well known far and wide for its station and this deserves to be repaired and kept as a historical monument to the town.”

Irish Rail invested substantially in the Portarlington station in recent years, with the expansion of the car park and lengthening of the platform.

The former South Kildare TD issued the statement as Irish Rail invited companies to bid for a contract, as part of its ‘Interior Refurbishment Programme’ on its first-class carriages.