Boys from every barony 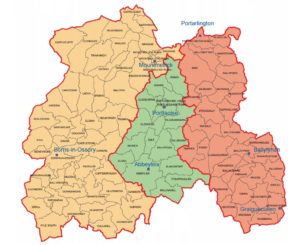 A map of Laois

LAST month, I left you with a poser on the number of townlands I pass through on one of my regular 5km-limited cycle routes. It’s a question I couldn’t answer myself at the time, and I’m not sure if I can provide the most satisfactory answer now.

Without being too pedantic, I’m going to say that where the road seems to be the boundary line between two townlands, I would count that as having passed through both townlands. To be fair, I won’t count the instances where I cross back into a townland, which I have already been through.

The first 3km-odd takes me from Killeen down to Cappakeel crossroads, where I turn right onto the Vicarstown Road. I was surprised to find that, in that short distance, I pass through six townlands – my starting point of Killeen, then on to Ballyduff, Kilmurry, Garrymaddock, Killone and Cappakeel. I have counted Kilmurry because the road seems to form part of the boundary with Ballyduff. But even though Morett comes within the puck of a ball to the road, and I can clearly see Morett Castle in the distance, I haven’t counted it, because I would be straying from the Barony of Stradbally to the Barony of Portnahinch.

At the mention of the baronies, I am always reminded of a line from Percy French’s song ***Phil the Fluter’s Ball***, where ‘there were boys from every barony and girls from every part, and the beautiful Miss Bradys in their private ass and cart’. The barony was still in common usage in Percy French’s 19th century to identify where you were from. As an administrative area, though, many baronies had been abolished by the mid-19th century.

A barony encompassed a number of townlands – the townlands, in most cases, being the older land division, often pre-dating the arrival of the Normans. Just to complicate matters, the baronies which we know of today were themselves often based on older Gaelic land divisions. Three of the Laois baronies – Clarmallagh, Clandonagh and Upperwoods – were divisions of the ancient barony of Upper Ossory. In its turn, Upper Ossory was a remnant of the ancient Kingdom of Ossory, which probably dates from the 1st Century. The ebb and flow of baronies down through the centuries would not be out of place in an episode of ***Game of Thrones***. Kingdoms were moved around like chess pieces, and Ossory spent its time moving between Munster and Leinster as powerful chieftains tussled it out.

When the dust had settled after the Norman Invasion and clan wars had mostly fizzled out, it is generally accepted that there were now 331 baronies covering the entire country. A purist will tell you that the number is closer to 252, because there is the small matter of ‘half’ baronies, which later seem to have been subbed up to full barony status. But that debate is for another day. As for me, I am still on the road between Cappakeel and Vicarstown in the barony of Stradbally.

I often muse about placenames and I try to work out their origin before consulting the work of experts like John O’Donovan (he of the Placenames Commission), whom I mentioned last time. In the case of Vicarstown (Cosby) and Vicarstown (Dodd), they clearly derive from their proximity to Vicarstown village, with their Cosby and Dodd nominations a prestigious homage to the respective principal landholders therein.

Derrybrock is a different kettle of fish, though. Given that the Derrybrock bridge crosses the Stradbally river, my own thoughts are that it derives from the Irish ***brúach***, a river bank, and ***doire***, which is oak, so Oakbank would also fit the bill. John O’ Donovan, however, disagrees with me and suggests that the name derives from the oak wood of the badgers, ***broc*** being the Irish for badger. You win some, you lose some.

Onward I go from the wood of the badgers, making my way towards the Athy/Stradbally road, crossing the Stradbally river twice on the way – first, where the river forms the boundary between the townlands of Monaferrick and Inch, and second, where it forms the boundary between the townlands of Garrans, Mill Land and Ballykilcavan. By the time I get to the Athy Road, I have traversed through another seven townlands; and on the run into Stradbally, I touch on Knockphilip and through the townland of Brockley Park (once the domicile of the Earl of Roden).

My fourth crossing of the Stradbally river occurs in the town of Stradbally itself, and I exit at the top of the town at the intersection of the townlands of Newtown and Stradbally, heading towards Rathmore. By the time I return to Killeen and a well-deserved cup of tea in prospect, I have been through a further six townlands.

By my calculations, along a looped route where I am never more than 5km from home, I have managed to visit 30 townlands, all within the barony of Stradbally. I have also crossed in and out of electoral districts, not to mention civil parishes. You may think I have covered a lot of ground in this jaunt, but in a barony that has 97 townlands and a county that has ten baronies, believe me, there are plenty left to explore.

My cycle route took me less than an hour-and-a-half of leisurely cycling, and if I were to delve into the history of all the townlands, baronies, electoral districts and civil parishes, I could fill the pages for years to come.

But I will spare you all that for now. If you do wish to explore further, though, I would recommend www.logaimn.ie as a source; www.townlands.ie is another useful source and worth a visit – a little bit of web surfing as opposed to pedal power. And you don’t have to dodge the weather.

Until the next time, stay safe.