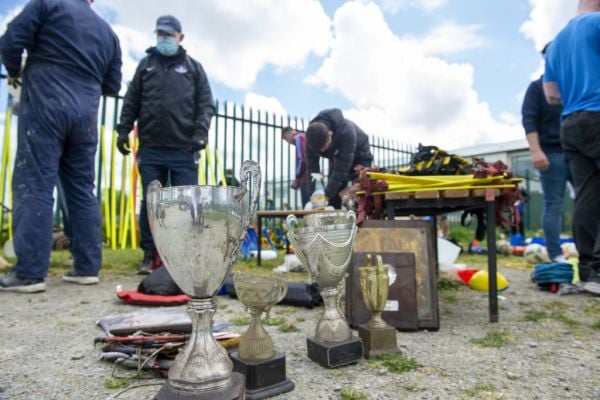 A soccer club that suffered up to €50,000 worth of damage in an arson attack says it will keep going and will not be deterred.

There has been a strong response to a fundraising page for the club in Drogheda, Co Louth, with more than €10,000 raised in just over 12 hours.

The fire at Drogheda Boys and Girls club, whose past players include Ireland Internationals Gary Kelly and Nicky Colgan, was discovered as coaches arrived for what was the first training session for a group of under eight players yesterday morning.

Years of work to build something up, taken away because someone was determined to burn it down for the craic

The fire destroyed where the club’s equipment and gear was stored.

Rory Kerr, head of coaching at the club which has 270 members, said it was the third time in ten years that the club had been targeted.

Their lawnmower was burnt out in 2011, their boot room lost in 2015 and this time the club has issued a strong statement.

Published on social media, it said: “Years of work to build something up, taken away because someone was determined to burn it down for the craic. For entertainment.”

The club said its quick-thinking coaches “were still able to do their best and give the kids as much as a positive experience as possible while firefighters battled the blaze, today you are our heroes.”

It continued: “To the wider general and local football communities, who have had to listen to us, defend our area and its potential, today we are embarrassed. To the fire service and gardaí who spent all day making things safe and investigating, today we were impressed.”

Speaking as coaches, parents and players tried to salvage what was left, Mr Kerr said: “We have two girls teams training today.  They can’t stop us, they won’t stop us.  While the kids train, we clean.”

The club needs a new container and equipment but Mr Kerr said its message during Covid times is “if a group of people get together, they can’t be knocked down. We are not doing this for the vandals, we are doing it for the kids, the kids come first.”

The GoFundMe page for the club was set up on Saturday evening, and by Sunday morning had exceeded its initial target of €10,000.

Mr Kerr said the donations “give us the lift we need” and are people’s way of “showing their support and that their opinion is that we should keep going.”

Gardaí confirmed that they are “investigating an act of criminal damage that occurred on Marley’s Lane, Drogheda, yesterday morning, Saturday 15th May 2021. No arrests have been made, investigations are ongoing.”

Officers are appealing for any witnesses or anyone with information to contact the gardaí in Drogheda.