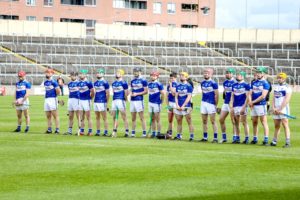 Seamus ‘Cheddar’ Plunkett has made two changes to the team that lost to Dublin last when naming the team for tomorrows meeting with Clare.

Podge Delaney, who picked up an injury late into last week’s game, is replaced by Conor Phelan while Aaron Dunphy makes way for Eoghan Gaughan.

Neither Laois nor Clare have gotten off to a good start in this year’s league both losing their first two games. Both have lost to Wexford with Laois also losing to Dublin and Clare shock losers to Antrim.

Whoever loses tomorrow will be in severe danger of gettinbg caught up in the relegation play-offs.