Nicole Turner rounds off an exceptional week with another silver 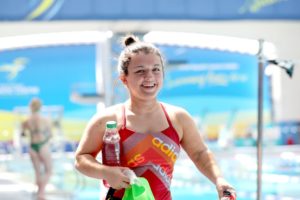 Nicole Turner rounded off an exceptional week by claiming another silver medal, this time in her favourite event, the 50m Butterfly. Nicole gave it everything pressurising Eleanor Robinson of Team GB all the way to the line finishing  just 0.65 seconds behind the English swimmer.

By any stretch of the imagination it was an exceptional week for the Portarlington teenager at the World Para Swimming European Open Championships in Funchal, Portugal.

On Tuesday Nicole won Ireland’s the first medal of the championships when taking bronze in the SB6 200m Individual Medley, putting on a brilliant display as she battled for third place in a time of 3:09.57.

Two days later Nicole finished in third place tonight in the S6 50m Freestyle, to win her second bronze medal of the week. Nicole finished with a time of 35.56 seconds, smashing her own personal best for this event.

She had to show some real fight as she battled for third place with Eleanor Robinson from Team GB, who finished 2.87 seconds behind the Irish superstar.

On Friday evening things got even better for the Laois girl.

In winning her third medal of the week Nicole struck silver in the SB6 100m Breaststroke with a time of 1:42.52.

Nicole went into this contest full of confidence. She put on a stunning performance as she led the way for most of the race, just pipped to the gold medal by Hungarian, Evelin Szaraz by 2.22 seconds. The Portarlington teenager finished in a time of 1:42.52, setting a new personal best.