Relegation a real threat as Laois fall to Cork 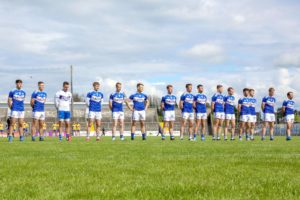 It didn’t look good for Laois from the off. From the throw-in Colm Begley fell to the ground. While he was being treated Laois had two great opportunities to score, the first Kieran Lillis fisted wide from close range and seconds later Evan O’Carroll’s shot hit the upright.

From the rebound Cork went on the counter attack as Begley walked off the pitch. Cork took full use of the advantage of Laois being short a man in defence as Luke Connolly rampaged forward passed to Sean White who calmly finished under Niall Corbet for a goal.

With both sides landing four points, Donie Kingston (free), Brian Byrne (2) and Danny O’Reilly on target for Laois, the goal was still the difference at the water-break.

Another Donie Kingston free narrowed the gap but Cork wasted no time in putting five between the sides when Ruairi Deane slotted home Cork’s second goal.

From there to half time the teams equally shared six points leaving Cork ahead 2-7 to 0-7 at the break, but Cork were looking the far sharper.

Niall Corbet got the second half scoring up and running when he converted a 45 and added a second but in the mean time Cork had added two points.

Danny O’Reilly pointed for Laois in the 51st minute and we would go almost ten minutes before the next score which came from Cork, a Mark Collins free while another free from the same player were Cork’s only scores from placed balls.