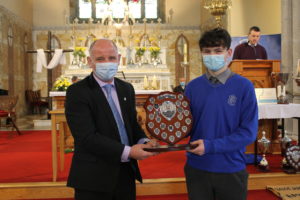 KNOCKBEG College recently held its annual parents’ day and awards ceremony. The event reflected on a year like no other, while the leaving cert boys received a special accolade to acknowledge the difficult journey they’ve been on in the last two years.

The contribution of two veterans of the school, Mgr Brendan Byrne and deputy principal Fr Shem Furlong, was also acknowledged.

The event was held on Tuesday 18 May in St Clare’s Church, Graiguecullen, where Mass was celebrated by Bishop Denis Nulty, Fr John Dunphy and Fr Furlong. The service was broadcast live via the parish webcam, with students tuning in from their classrooms.

Mgr Byrne, a member of the board of management, has been a marvellous ambassador for Knockbeg College down through the years. He has been a valued member of staff and has been instrumental in getting the new school to the stage it is currently at. This year marks the 60th year of Mgr Byrne’s ordination and everyone at Knockbeg College wanted to acknowledge his passion for the school and congratulate him on reaching such a huge milestone. He was presented with a framed photo of the college by the board of management.

Every May, members of the previous year’s leaving cert class who have achieved outstanding results in the state exam are invited to the awards ceremony for the staff to acknowledge their achievements.

Third-year student Juozas Cioladis has been selected for a tennis scholarship and will be attending the McCaulie School in Tennessee this September for his fourth year in secondary school. 2019 was a particularly good year for Juozas, having been named Player of the Year by Tennis Ireland. He currently ranks number two in Ireland at under-16 level.

The Parents’ Council Award is presented to a student or students whom staff feel has contributed in a positive manner to life in Knockbeg. This year it was felt that the entire sixth-year group should receive the accolade, having contended with lockdowns and uncertainty, while all the time trying to focus on their exams. Head prefect Seán Tuomey accepted the award on behalf of the leaving two class of 2020-21.

Mr Carew and the staff would like to thank Fr Dunphy and all associated with St Clare’s Church and congratulate the award winners.

SEE OUR TWO-PAGE SPREAD FROM THIS YEAR’S KNOCKBEG COLLEGE GRADUATION CEREMONY IN NEXT WEEK’S LAOIS NATIONALIST, ON SALE FROM TUESDAY IN ALL LOCAL STORES OR ONLINE.