Laois embroiled in relegation scrap after losing to Kildare 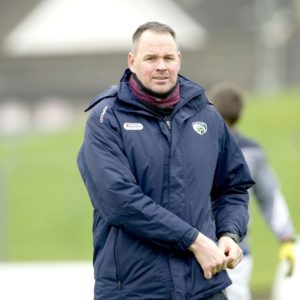 Laois manager Mike Quirke must now prepare his side for the relegation playoff Photo: John Quirke/www.quirke.ie

Laois find themselves embroiled in the relegation scrap after losing their third game this year’s national league. As in previous it was largely their wastefulness in front of goal that lands them in this unsatisfactory position.

Laois got off to the best of possible starts when Evan O’Carroll raised a white flag inside 30 seconds. And while the O’Moores were looking lively it was Kildare who were doing all the scoring and by the tenth minute held a three point lead.

Evan O’Carroll reduced the deficit with a great points but it was only a temporary reprieve. We went scoreless for six minutes, three either side of the water-break Kildare added two to make it a four point game

Laois kept battling and a brace of Gary Walsh frees took the bad look off the scoreboard but still Kildare swept forward. Kevin Flynn put three between the sides before Luke Flynn was left with a simple tap in from Paul Cribbin’s pass to leave Kildare leading by 1-7 to 0-4 at the break.

Just as a week previous Laois were very wasteful in front of goal shooting seven wides and at last six of those should have been scores.

The sides evenly shared four points in the opening five minutes of the new half, the Laois brace coming from Gary Walsh.

If they hadn’t been ringing already the alarms bells were going for Laois a minute later when Kevin Flynn sliced through the Laois defence to slot the ball under Corbett for Kildare’s second goal.

Gary Walsh was to score Laois’s first goal of the national league when he took the best pass he got all evening, that from Kevin Flynn’s misdirected free kick, and rattled Mark Donnellan’s net.

But in the remaining 30 minutes of play Laois would score only two further point through Eoin Lowry and Walsh (free) while Kildare kept the scoreboard ticking over to deservedly win by 12 points.