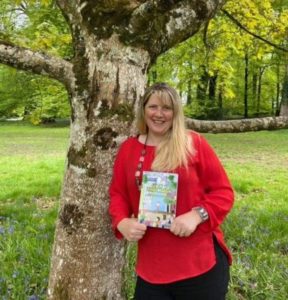 A LAOIS resident with some experience of raising children (she has five), dyslexia and the GAA has decided to combine the three in a new book released this week.

Eleanor Merriman (41) has written Up for the Match for the eight to 12-year-old bracket and has based the story loosely on her travels with her grandparents following the Lilywhites during the ’80s and ’90s.

Originally from Hazelmere in Naas, she now lives in Shanahoe, Co Laois. “House prices push you further out the M7!” she said, adding: “there were times when you wish you could just pick up the house and move it because people are just too far away in a crisis.

Eleanor and her husband have five children aged between three and 12, three of whom have dyslexia, which saw her publish in a dyslexia-friendly font. (I know! I never realised there was such a thing either).

She explained how this meant that the troublesome, opposite-shaped letters – b and d, p and q – were of varying size in the font and the tops of each letter were lighter in shade. “So when a child is concentrating on a line of print, the lines above and below aren’t so distracting.

“I was introduced to the GAA by my grandparents Seamie and Eileen Curran. He was a ref and she played camogie,” said Eleanor.

“We travelled with our heads held low for a lot before the glory days, when Mick (O’Dwyer) took over,” she laughed.

“We’d watch the county team train and then we’d travel to matches bringing a picnic with the ‘hang sangwiches’ in the tin foil, or egg ‘sangwiches’ if you were unlucky!

“And the greatest thrill of the lot was maybe stopping for a meal on the way home,” she remembered.

“We’re now at the stage that if we drive past a GAA pitch and there’s a match on, we’ll all stop and watch,” she said.

Eleanor signed up for an online writing course around Christmas, but decided “my idea is far greater than that and I wanted to get something out that could get people’s interest”.

And to keep these interests at their broadest, Eleanor does not address her inherent Lilywhiteness.

“At the very start of the book I don’t say where I’m from, as that could be held against me!”

And are you still kicking ball? we asked.

“Oh, God no! Just round the back yard … I used to play for Naas and I could’ve played county, but the option wasn’t available then,” she said.

“I played soccer with Peamount United, but that was before the National League. Opportunities weren’t there,” she said stoically.

However, the leisure management graduate still keeps super-fit and works in sports therapy, teaching yoga, pilates and is also a qualified masseuse.

But apart from all that …

Up for the Match is now available online from Shanchua Books (a nod to Shanahoe, albeit as Gaeilge) as well as in Barker and Jones, Naas; Farrell and Nephew, Newbridge; Woodbine Books, Kilcullen; and the University Bookstore in Maynooth.

“I’m nervous about this, because I’ve never done anything like this before,” admitted Eleanor.

Well, then, spare a thought for her illustrator Mya Foley from Meath, who is also taking a first dip in the world at publishing, at the ripe old age of 14!