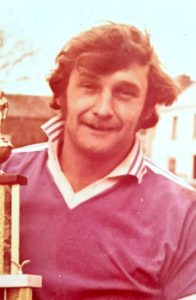 THE death of Tom Bowe affectionately known as the ‘Kid’ caused great sadness in Ballacolla. the son of the late Tom and Anne of Coole, Ballacolla, Tom grew up in hurling heartland and along with his brothers John and Kevin enjoyed success with their native club.

Fifty years ago, Tom and Ballacolla reached the minor final but despite their best efforts were second best to their neighbours from Abbeyleix. However, when the sides met at senior level four years later Tom Bowe played a big part in gaining revenge.

Forty-one years ago, Tom was part of the junior team that brought the Fr Phelan Cup to the Village for the first time. He played a major part in the victory and was later chosen as junior hurler of the year.

He did not enjoy much success at senior level but in 1972 helped the club regain senior status when they beat Ballinakill after a replay in the intermediate final captained by Eugene Moore.

Tom passed away on Monday 24 May in the care of the staff of Brooke Haven Nursing Home, Ballyraggett. On Thursday evening his removal took place to the Church of the Immaculate Conception, Ballacolla for recital of the Rosary. On Friday morning Requiem Mass was celebrated for Tom followed by private cremation.

On both Thursday and Friday Clough/Ballacolla GAA club formed a guard of honour observing strict Covid regulations. The coffin was draped in the colours of the club which Tom contributed so much to. Neighbours and friends lined the route along the Durrow road as Tom was brought from Ballyraggett on Thursday evening.

Below is a brief look at one of the most extraordinary senior championship games played between Ballacolla and Abbeyleix when Tom was one of the stars of a one sided contest. The game was played in Durrow 46 years ago.

This was the South Laois championship and the game was played in May and up to that truly little separated these two sides.

Michael Delaney had joined Ballacolla a short time previous and opened the scoring with a goal after two minutes. Son Kavanagh sent a free direct to the net after ten minutes but points by Jim Kelly and Son Tyrell kept the neighbours in touch.

A goal from a free by Seamus Clooney left the half time score 2-2 to 1-3 in favour of Ballacolla but they would have Hill advantage on the changeover.

What happened next was frightening for Abbeyleix? First the gifted Jack Cummins scored a hat trick of goals inside six minutes and before Abbeyleix could repair the damage Mick Ahearne added two more.

Had it been another sport the referee might have called a halt to proceedings. Instead the punishment continued with further goals from Michael Delaney, while Jack Cummins made it four for himself before he passed to Tom Bowe who completed the full ten.

Not many teams have scored ten championship goals since in one hour.