Laois ladies squander too many chances in Aughrim 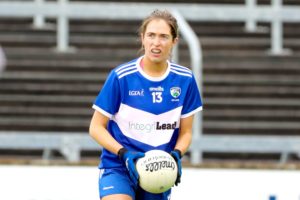 Mo Nerney came on to score a late goal and give Laois some hope against Wicklow       Photo: Paul Dargan

IT would be a safe bet to say that Laois manager Donie Brennan would not have been very happy in the aftermath of this game in Aughrim today. Maybe it was the fact that Laois had already qualified for the league semi-final that they were a bit complacent or maybe it was the fact that the manager made five changes from the team that defeat Longford a week ago, but whatever the reason this was a below par performance from the Laois ladies.

Certainly Wicklow belied their status of being locked in a relegation semi-final because they had some outstanding players on display most notably their full forward Marie Kealy who scored 2-5 and with whom the Laois defence could never get to grips with.

But Laois have no one but themselves to blame for losing this game. They had their fair share of the possession and in all honesty looked the better side but time and time again the wasted that possession. All too often their final pass went astray and scoring opportunities were squandered.

Laois held the narrowest of leads at half time leading 0-6 to 1-2 with the points coming from Leah Tarpey (3),Aoife Kirrane (2) and Sarah Ann Fitzgerald. Kealy scored her first goal in the 13th minute.

The sides swapped a brace of points each on the restart before Kealy struck for her second green flag 10 minutes into the new half.

Laois responded positively rattling off three points on the trot and hold a one-point lead at the water break, but Laois allowed Wicklow back into the game conceding four points and to lead by three with six minutes remaining.

Having being introduced only minutes earlier Mo Nerney showed why she is one of the most accomplished footballers around when she levelled the game with a cracking goal in the 57th minute.

But again Wicklow displayed the bottle by charging back down field where they won a free which, appropriately, Kealy converted.

That was to prove to be the winning score but in truth Laois still had time to waste two glorious goal chances. The loss might not affect their semi-final but it does break their winning momentum.

Laois will now play Roscommon in the Division 3 semi-final next weekend.