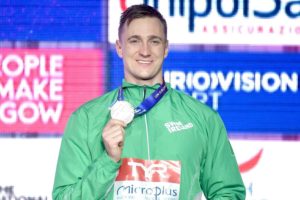 Shane Ryan with the bronze medal he won in the Men’s 50m backstroke at the European Short Course Swimming Championships in 2019                 Photo: INPHO/Andrea Staccioli

IN today’s edition of the Laois Nationalist we have story about how Shane Ryan, whose father hails from Portarlington and who emigrated to the USA in the 1980s, got a great surprise at the weekend.

FINA, the international federation recognised by the International Olympic Committee for administering international competitions in water sports, had issued an invitation to Ireland to send the Men’s 4x100m Medley Relay to Tokyo 2020.

This was brilliant news for Shane who had already qualified for the 100m Backstroke in Tokyo and now to have the opportunity to participate in two events was the icing on the cake.

Twenty-four hours later Stephen’s world came crashing down on when Sunday when Swim Ireland received correspondence from FINA rescinding their invitation for Ireland to compete in the Men’s 4x100m Medley Relay at the Olympic Games.

In a statement Swim Ireland say: “Having received and accepted FINA’s invitation to compete, we are extremely disappointed that FINA have told us that the invitation was issued in error, particularly given the impact on the affected athletes.”

The good news from Shane and the other swimmers’ position is that Swim Ireland intend challenging the decision and are currently exploring all options in this regard.

Olympic Games Relay Qualification Procedure sees 16 countries participate in each swimming relay at the Olympic Games. The fastest 12 teams in the heats at the 2019 World Championships in Gwanju, South Korea gained automatic qualification for Tokyo 2020. The four remaining spots were filled based on performances at FINA designated meets during the qualification period, which ended on 31 May.

Apparently the issue arose due to the failure of FINA to have included times set by Greek teams in their 400m medley relay and their 400m mixed medley relays at their Acropolis meet last month.

The Greek time was .01 seconds faster than that set by Ireland and sealed their place at the Tokyo Games while Switzerland lost out in the 400 mixed medley event having, like Ireland, being informed at the weekend that they had qualified.

In a statement issued to swimswam.com, FINA officials in Switzerland stated that they are “looking into the matter internally”.

GAA fixtures for the coming week are confirmed