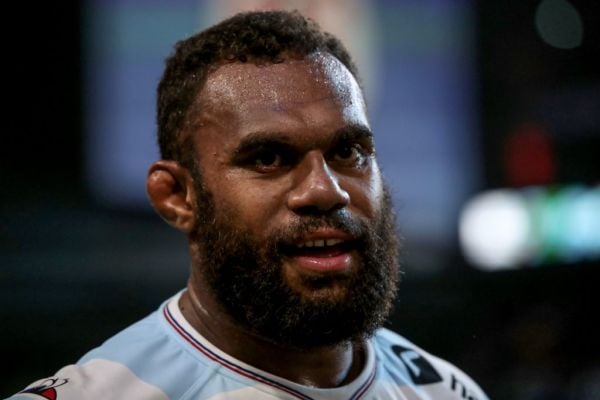 Former European Player of Year, Leone Nakarawa, will not be joining Ulster.

As the Irish Examiner reports, provincial chiefs confirmed that the deal to sign the Glasgow Warriors forward Nakarawa (32) has fallen down following their receipt of ‘a detailed medical report’ on the Fijian.

Nakarawa, 32, who was named European Player of the Year in 2018 while at Racing 92, had inked a one-year deal last January.

An Ulster Rugby spokesperson said this morning: “We can today confirm that, on receipt of a detailed medical report following an examination by the club at the weekend, Leone Nakarawa will no longer be joining Ulster Rugby for next season.

“This outcome is disappointing for both the player and Ulster Rugby, however, we will continue to build strongly with our preparations for next season. We wish Leone the very best for the future.”

We can today confirm that Leone Nakarawa will no longer join the province this summer.

Bolton, whose grandmother is from Dublin, will arrive in Galway with a glowing reputation as one of the brightest young prospects in South African rugby.

The 20-year-old represents the University of Free State in the Varsity Cup and also impressed in the U21 SA Championship.

Connacht coach Andy Friend is thrilled to have landed such an exciting – and versatile – player.

“After we learned of Shayne’s availability and his Irish ancestry, we kept an eye on his progression and did some further work to confirm his playing ability.

“It quickly became apparent that he was the type of player that could add real value to our squad. He has been turning heads in South Africa with his recent performances and, while he’s still only 20-years of age, he has all the attributes to become a top class professional player.

He said players with versatility are a key component of what they look for in their squad mix, and he fits that category perfectly.

He added “Shayne started off at fullback and on the wing before moving to centre in the last year or two, so we’re looking forward to his arrival and seeing how best to integrate him into the squad.”