Portlaoise Court: Man sentenced to four months asks will he be home for Christmas 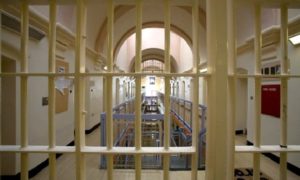 A man asked Judge Catherine Staines, after she had given him a four month sentence, “will I still be home for Christmas?”

The query came when the man appeared before Portlaoise District Court last week by video link from Limerick Prison.

He pleaded guilty to assault at Portlaoise Prison on 21 November last year.

The court heard that at 7am on the morning of the offence the defendant struck another prisoner over the left eye and on his nose.

The defendant had 38 previous convictions which included burglary, robbery and theft and is due for release from custody on 13 November this year.

Judge Staines noted that the man “didn’t like what was said to him and punched him in the face.”

She added: “People in prison have no say who they have to be in a cell with.”

Defending solicitor Barry Fitzgerald said that his client, “reacted to some sort of a suggestion made to him. He more or less pushed him in the face. It started out with some sort of a verbal altercation.

“His background was marred by alcohol and violence. His wife left him which added to his stress. He realises he needs to mend his ways and lost various privileges he had in the prison.”

Addressing the court the man said: “From the bottom of my heart, I’m sorry. I shouldn’t have reacted as I did. I do want to apologise to the man. I’m sorry. I don’t want to mess up anymore. I’m doing my best in custody. I was going through a horrible time that day.”

Judge Staines convicted the defendant of the offence and sentenced him to four months in custody concurrent with the present sentence he is serving.

“I don’t know what that means,” he replied. “Will I still be home for Christmas?”

Judge Staines told him: “It means it won’t be added to your current sentence, but will be recorded as a conviction.”