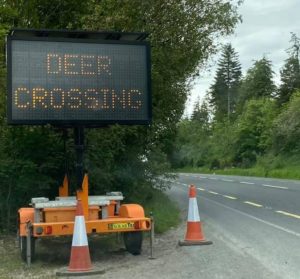 One of the digital warning signs installed near Abbeyleix

WORK is underway to tackle the long-running problem of serious road accidents caused by wild deer near Abbeyleix.

Digital warning signs have been installed at both ends of the high-risk section of the N77 between Abbeyleix and Durrow, which is notorious for vehicle crashes involving deer crossing the route.

Preliminary planning is also underway for the erection of deer-proof high fencing on each side of the forest-flanked road.

Ideally, fencing will be installed within the next few months but the project will require extensive planning.

The digital signs, which were erected last week by Transport Infrastructure Ireland (TII), are a temporary measure to alert drivers to the imminent risk, while further surveys and discussions attempt to resolve the animal welfare and safety issues involved.

The problem was highlighted again at a council meeting last March, after deer caused two crashes within two days on the busy road. Both animals were killed and cars were badly damaged in the frightening collisions.

Another car was a write-off following a similar crash three weeks ago and there are regular minor collisions involving deer on the route. There are large herds in the beautiful woodlands on both sides of the road.

After cllr John Joe Fennelly from Abbeyleix raised the issue at council level, he was contacted by the Wild Deer Association of Ireland (WDAI), which carried out a detailed survey in the area over a number of weeks last spring.

The WDAI strongly recommended installation of a deer-proof fence on both sides of the road, as well as deer park gates at forestry entrances. The survey was forwarded to TII and the county council.

Cllr Fennelly suggested an on-site meeting between council officials, the WDAI and Transport Infrastructure Ireland (TII), to come up with solutions that would protect both motorists and wildlife. The council had already been in contact with TII since last Christmas regarding possible road safety measures, as well as with wildlife groups.

As a result, TII installed digital warning signs last week and further measures are in the pipeline.

Speaking to the Laois Nationalist yesterday, Ambrose McKay of the WDAI said the group has been working with local and national agencies, as well as gardaí, for the past six months in a bid to come up with solutions that will protect the deer and prevent potentially fatal traffic collisions.

He said: “Our deer management team worked tirelessly to complete a survey that involved many man hours on the ground, risk assessment to quantify the problem and implement solutions to both public safety and animal welfare issues.

“So far, progress has moved in a positive direction with TII installing digital display signs at both ends of the high-risk part of the roadway south of Abbeyleix.”

He added that the next step is planning for the installation of fencing, with preliminary work already being carried out by Laois County Council.

Founded in the early 1980s, the WDAI describes itself as the largest management of conservation group in Ireland. The deer management team has more than 50 years’ combined experience in dealing with the well-being of wild deer.

Mr McKay said: “We are actively working in conjunction with An Garda Síochána, the IFA, Uplands Council, the National Parks and Wildlife Service and Wildlife Rehabilitation of Ireland, to name but a few.

“We endeavour to promote positive management to protect the future of deer and propose recommendations to safeguard the general public. We would like to thank cllr Fennelly for involving us in the situation in Abbeyleix.” 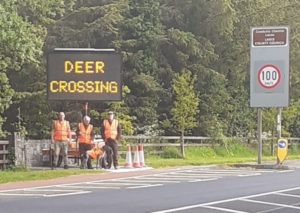