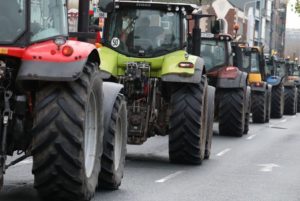 Tractors will hit the streets of Portlaoise this morning. General image for illustration purposes

GARDAÍ are warning motorists to expect delays in Portlaoise this morning, as tractors take to the streets as part of the national IFA Day of Action.

Gardaí are expecting about 50 tractors to take part in the Portlaoise protest, which will start at 11am.

Gardaí said: “If you are in Portlaoise town this morning, please be conscious that there may be some minor delays with traffic.

“We are working with the IFA to ensure movement and as little inconvenience as possible to all road users.”

According to gardaí, about 50 tractors will depart from Fr Browne Avenue, opposite O’Moore Park, at 11am. The convoy will travel along the Abbeyleix Road, before turning right at the Abbeyleix Road roundabout onto James Fintan Lalor Avenue.

From there, the cavalcade will move along JFL Avenue to the Timahoe Road roundabout, where it will turn right onto the Timahoe road. The tractor drivers then plan to turn right into the Kylekiproe area (Dunnes), where the protest will pass the town’s main supermarkets.

The convoy will rejoin JFL Avenue at the county hall/ Supermac’s junction and then make its way back out the Abbeyleix Road, where the vehicles will disperse.

Portlaoise is one of 30 towns nationwide staging the demonstration, which aims to highlight the importance of commercial farming to the rural economy.