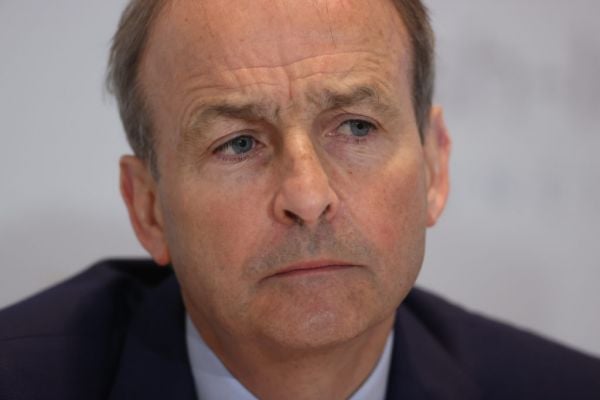 His comments come amid continuing uncertainty over the fate of the devolved executive once Arlene Foster formally resigns as first minister.

When Mrs Foster resigns – a move expected at the start of next week – deputy First Minister Michelle O’Neill will be automatically removed from her post at the same time, as the joint office can only function if both positions are filled.

The DUP do not speak for the majority of citizens in the North, I made this very clear today in the meeting with the EU Commission & British Government.

The Protocol offers stability, certainty & real opportunities to local businesses with access to both the EU & British markets pic.twitter.com/GV9reLqz81

Both the DUP and Sinn Féin will then need to renominate their respective first and deputy first ministers within seven days.

If the process proceed without issue, the DUP will nominate Lagan Valley MLA Paul Given as First Minister and Sinn Féin will renominate Ms O’Neill as deputy First Minister.

However, if one of the parties declines to renominate, or if either nomination fails to gain sufficient Assembly support, then a functioning Executive could not be formed and a snap election would become likely.

Sinn Féin has declined to definitively state its intentions next week amid speculation the party has sought firm guarantees from new DUP leader Edwin Poots that he will fulfil a commitment to legislate for Irish language protections at Stormont.

Mrs Foster, Ms O’Neill and Mr Martin were among political leaders attending a meeting of the British Irish Council in Co Fermanagh on Friday.

Asked about the stability of the institutions in Belfast, the Taoiseach said: “Throughout the journey of building peace on the island, there will be many ups and downs, there’ll be many twists and turns.

“But as political leaders we have to make that commitment to the fundamentals of the Good Friday Agreement and the frameworks of that agreement.

“I’m a glass half full person in the sense that I believe everybody has a desire to keep the institutions in place, to work the institutions and make them effective for the people that we represent.

“Obviously there will always be issues, there always have been issues, and the parties obviously will engage and work through those issues, there are overarching agreements that everybody has signed up to.

“People do need commitments in respect of those agreements.

“But ultimately, in politics, where there’s evidence of goodwill, we can overcome these challenges.

“And in my view, that’s the agenda coming forward.”

On Thursday, Mr Poots warned it would be “explosive” if Sinn Féin refused to nominate.

Ms O’Neill was again non-committal on Friday when asked what her party intended to do.

“Sinn Féin are very committed to powersharing and always have been, we believe in it,” she said.

“We’ve always worked the institutions faithfully, we demonstrate good faith and respect for other parties around the executive table.

“So it’s challenging at the best of times, as Arlene will attest to. But I think that, for our part, we’re committed to making it work.

“We’ve had some discussions, as you know, between Mary Lou McDonald and Edwin Poots, and Edwin Poots is in no doubt around what’s required to make powersharing work.”