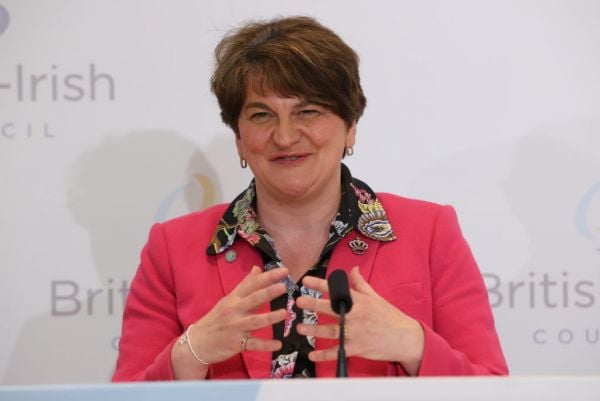 Arlene Foster broke into song at the British Irish Council summit in Co Fermanagh, with a line from her favourite Frank Sinatra song, That’s Life.

The North’s First Minister entertained other political leaders with a serenade during a press conference.

She sang the lyrics: “That’s Life. That’s what all the people say. You’re riding high in April, shot down in May.”

The outburst received a round of applause from British and Irish leaders.

Speaking during one of her last official engagements as Northern Ireland First Minister, she added: “I think it’s a good way to end my political career at the British Irish Council meeting in Fermanagh because it has absolutely encapsulated the totality of relationships and I am pleased everyone is here.”

Taoiseach Micheál Martin and UK Cabinet minister Michael Gove were among politicians being hosted at the event by Ms Foster and Deputy First Minister Michelle O’Neill.

The meeting, which was one of Mrs Foster’s last engagements as First Minister before her formal resignation, was focused on Covid-19 recovery.

Ahead of the discussions, Mrs Foster welcomed the participants to “wonderful Fermanagh”.

“I am just really pleased that we can have this British Irish Council in person,” she said.

So who predicted the Masked Singer as @ArleneFosterUK’s next move?
🎤

Ms O’Neill added: “We’re absolutely delighted to be hosting the BIC meeting here today and it is absolutely brilliant to see people in the place and have face to face conversations again.

Taoiseach Micheal Martin said he believes discussions between the UK government and the EU over difficulties with the Northern Ireland Protocol should now “pick up momentum”.

Speaking following the meeting in Fermanagh, Mr Martin said: “From our perspective we believe the mechanisms exist within the Withdrawal Agreement and the protocol to facilitate a working out of these issues.

“There are issues to be refined and resolved and we acknowledge that, but we believe the mechanisms within the framework agreement facilitate that. I think there is opportunity within that framework to resolve this.

“I think discussions should pick up momentum, they did it before prior to the Brexit deal being signed off so, in my view, it is in the capacity of both the UK Government and the European Union to arrive at an agreement here.

“Ireland, as members of the EU, we have appraised people of the sensitivities of all of this, we want to be helpful. I do think there is potential.”