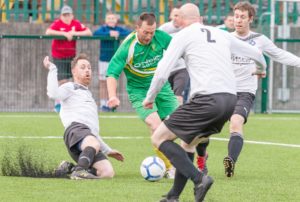 THEY don’t do anything the easy way in Crettyard and they certainly didn’t make this one easy, relying on a last gasp penalty miss from Baltinglass to claim the league and cup double on Sunday, winning their second trophy in a week following their play off win against Killeshin last week.

It was close throughout as Crettyard dominated but once again struggled to finish off their chances.

It was a frustrating start for both sides as neither of them could get a foothold into the game that they needed. Baltinglass took the lead on 22 minutes when Paddy Kelly knocked in the ball at the back post after a scramble in the box as Crettyard failed to clear.

Ten minutes later Crettyard bounced back with some good build up play. A good move started by Phillip Brennan on the right hand side, recycled into the middle where it was played back into Garry Rowan on the right who crossed into the back post where Mark Fox headed in.

Crettyard threatened throughout the second half but struggled to finish off chances, lacking that killer instinct. A minute in, Brennan’s shot was cleared off the line before a Jimmy Dunne free went straight into the keeper. Minutes later a Fox effort from outside the box went wide.

With all penalties going in successfully, Crettyard found themselves 4-3 ahead as up stood Tom Cassells for Baltinglass and his effort saved by Geoghan in the Crettyard goal. However, referee Jim Wynne ordered a retake, which subsequently went in to level things up. David Maher knocked in Crettyard’s fifth and it was all down to Paddy Sinnott to take it to Sudden Death. However, he sent it over the bar to hand Crettyard the win.