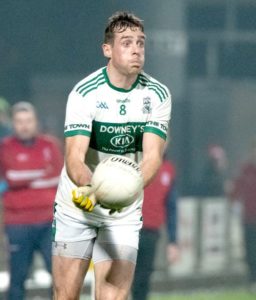 Kieran Lillis scored two cracking goals for Portlaoise in the defeat of Portarlington in the opening round of this year’s ACFL Division 1 in McCann Park on Sunday morning Photo: Denis Byrne

THE last time these two clubs saw action was on the first Sunday of October last year, and with very differing consequences. Portlaoise exited the championship after suffering a shock defeat at the hands of Emo while Portarlington earned themselves a place in the last four when defeating O’Dempsey’s.

On the evidence of what we saw in McCann Park on Sunday morning the Town look the likelier to make an impression in the 2021 championship while Portarlington will not be brimming with confidence for their 2020 semi-final which still has to be played.

Jake Foster opened this game’s scoring with a second minute free but Portarlington were not going to score for another 16 minutes and in the intervening period Portlaoise effectively wrapped up the game.

Ricky Maher levelled the game in the fourth minute with a good point from out wide on the left but a minute later was issued with a yellow flag which would have consequences later in the game.

At this stage Portarlington just could not cope with Portlaoise’s pace and movement and it came as no great surprise when goaled in the sixth minute. Maher then converted a free before Gareth Dillon and DJ White combined to send Paul Cahillane in on goal and score from close range.

Ronan McEvoy next raised a white flag and from the kick out Benny Carroll gained possession and tore in from the right and sent a rifle of a shot to the net. And by the water break two more points had been added through frees from Cahillane and McEvoy.

Prior to the break the Portarlington keeper did well to block a Cahillane effort with his feet but there was nothing he could do just after the restart when Lillis slip the ball under him despite being hassled by defenders.

Portarlington eventually once again found the target thanks to a brace of frees from Jake Foster and Colm Murphy. McEvoy pulled one back while another two fee from Murphy saw Portarlington go into the break trailing by 4-7 to 0-5.

In between those two scores both sides were reduced to 14 men following a minor scuffle. Portarlington defender Padraig Coffey appeared to hit out at Ricky Maher and was issued with a straight red card. For his part in the infraction Maher earned himself a second yellow meaning his game was at an end also.

Portarlington did come more into the game in the second half but whether that was down to their upping the game or Portlaoise easing off is debatable. Two points from Ronan Coffey and Sean Byrne were matched by Ronan McEvoy and Benny Carroll ensuring the 14 gap was still in place at the second water break.

Lillis made it a 15 point game soon after but Portarlington battled back with a brace of Colm Murphy points.

But the last of the action fell to Cahillane who split the posts with a free from close to the right sideline.