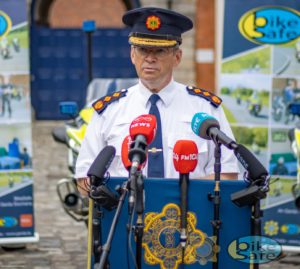 GARDA Commissioner Drew Harris has said that the €24m Garda Divisional Headquarters planned for Portlaoise is one of his top priorities.

He said: “The new headquarters in Portlaoise is a priority and it is required for the successful rollout of the new garda operational model.”

Commissioner Harris added that, while several other construction projects such as Harcourt Street are also a priority, he had been “very consistent” in highlighting the importance of the new divisional HQ in Portlaoise.

Former justice minister Charlie Flanagan TD told the JPC that the new Portlaoise HQ, which has been sought for 58 years, has “moved from being important to urgent and now critical”. He felt the OPW should be taken out of the equation, as major construction projects tended to become a case of “pass the parcel” with too many State agencies involved.

Deputy Flanagan commented: “I’m not impressed at the speed with which the issue has progressed, especially since I left office as minister for justice. With building costs increasing by 30% due to Covid, the clock is very much ticking on this project.”

Laois TD and junior minister Seán Fleming told the JPC meeting that he would do everything he could to “keep his foot on the accelerator” regarding the Portlaoise Garda HQ development.

Planning permission was granted last March for the Portlaoise project on the site of the current garda station, which will be the divisional HQ for the new division of Laois, Offaly and Kildare, serving about 600,000 people.

Meanwhile, Chief Superintendent John Scanlan told the JPC that the number of gardaí in Laois, excluding senior ranks of sergeant and above, has increased from 121 to 171 within the past ten years. Another garda will take up duty in Durrow on Tuesday 22 June.