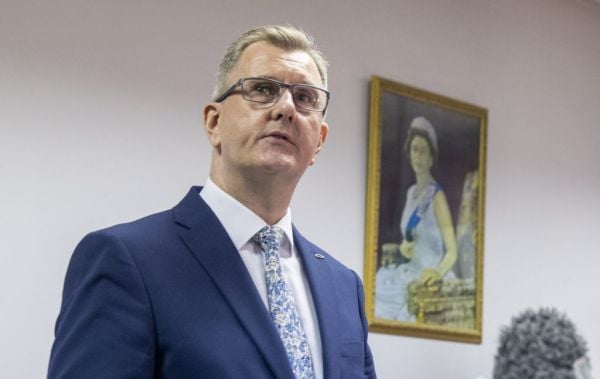 Sir Jeffrey Donaldson, the DUP’s leader at Westminster, has had a ringside seat for the extraordinary political drama which has consumed the party in recent months and has now put himself forward as a candidate once again for the role of party leader.

The Lagan Valley MP is widely expected to assume leadership of the party following the resignation of Edwin Poots, and his main challenge will be to restore stability following one of the most turbulent periods in the DUP’s history.

Mr Donaldson originally put his name forward to become leader after Arlene Foster was ousted following internal party unrest. He was narrowly defeated by Mr Poots by 19 votes to 17 in the DUP’s first ever leadership election last month.

However, Mr Poots’ decision not to mention his defeated rival in his acceptance speech and his positioning of close allies in key ministerial posts was seen as indicative of his failure to heal the wounds which had opened up within sections of the party.

Mr Donaldson was one of three MPs who turned up last week at a key Stormont meeting of DUP MLAs after Mr Poots announced his decision to go ahead and nominate his close ally Paul Givan to the role of First Minister, after a deal was struck ending a stalemate over Irish language laws, with the UK government agreeing to legislate if Stormont does not.

Mr Poots left the meeting before it had concluded, to nominate Mr Givan in the Assembly, and before a vote was taken which revealed that the majority of the DUP opposed the move.

Mr Donaldson was also in attendance at a key meeting at DUP headquarters later the same day, where Mr Poots was told that he had lost the confidence of party officers, prompting his resignation as leader just 21 days after he had been ratified.

Now, it seems that it will fall to Mr Donaldson to pick up the pieces, although if he does become leader he will have to deal with many of the same challenges which faced his predecessor.

The party was infuriated by the acceptance of the deal over Irish language laws, and Mr Donaldson may also be expected to take a harder line over the Northern Ireland Protocol, which unionists oppose.

He will also have to unite a party still reeling from the ousting of Mrs Foster as well as the resignation of Mr Poots, ahead of Stormont elections currently scheduled for next year.

Mr Donaldson has also previously indicated that, if he becomes party leader, he will run in the Assembly elections and take up the First Minister position at Stormont, although this could open up the possibility of a tricky by-election in his Lagan Valley seat, where the Alliance Party has made gains in recent years.

Whatever the outcome, Mr Donaldson is a political veteran and holds the title of the longest-serving MP in the North, having been walking the corridors of Westminster since 1997.

The 58-year-old, who was born in Kilkeel in Co Down, started out with the Ulster Unionist Party (UUP), which he joined at a young age.

He has previously spoken about the first time the Troubles affected his family – the murder of his cousin Samuel Donaldson, an RUC constable.

He was the first police officer to be blown up by the IRA in the conflict.

It was this event that influenced Mr Donaldson’s decision to enter political life.

At the age of 16, he followed his family tradition by becoming a member of the Orange Order, and later followed in the footsteps of his late father Jim by joining the Ulster Defence Regiment (UDR).

The former Ulster Unionist is seen as a moderate whose political outlook is broadly in line with Mrs Foster’s.

In 1985, aged 22, he was elected to the Northern Ireland Assembly, becoming the youngest person to win a seat at Stormont.

His relationship with former UUP leader David Trimble began to crumble over the Belfast Agreement.

Mr Donaldson led a walkout of the 1998 peace talks after opposing the early release of republican and loyalist prisoners.

He left the party along with Mrs Foster and Norah Beare and joined the DUP in January 2004.

There is a sense that the traditional wing of the DUP never quite trusted Mrs Foster due to her UUP roots, and Mr Donaldson could face a similar challenge if he is to succeed her.

In 2009, Mr Donaldson apologised for claiming for pay-to-view films on his parliamentary expenses during hotel stays.

While the cost of the films was in the highest price category, Mr Donaldson denied that the content he watched was of an adult nature.

Asked what he had been watching, Mr Donaldson said it included the Star Wars trilogy and The Lion, The Witch And The Wardrobe.

He was recognised by Britain’s Queen Elizabeth II in her 2016 Birthday Honours and was given a knighthood.