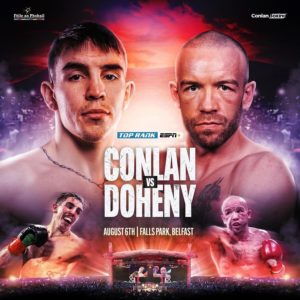 IRISH fight fans, and more significantly Laois fight fans, are in for a real treat next month. Portlaoise’s TJ Doheny and Belfast’s Michael Conlon will off in the headline bout at the Top Rank/Conlan Boxing event at Féile an Phobail in Falls Park, Belfast, on Friday 6 August.

In what has bee described as ‘the most significant all-Irish professional boxing match in decades’, WBO #1 junior featherweight Michael Conlan (15-0, 8 KOs) will defend his WBO Intercontinental title against the former world champion Doheny (22-2, 16 KOs) in a 10-round showdown.

Victory for Conlan would almost certainly guarantee him a world-title shot at 122 pounds.

For Doheny, who captured that title when he beat Ryosuke Iwasa in Japan to become world champion in August 2018, if he wins in Belfast it would put him firmly back in the the world-title picture after his shock defeat to Ionut Baluta in March of last year.

“This will be my first time fighting on Irish soil, and I can’t think of a better homecoming. It doesn’t get much bigger than this for an all-Irish clash, and the fans are in for a real treat. This is the kind of fight that I have been craving since my close majority-decision loss to Daniel Roman. Top opposition is what motivates me and helps me raise my game. I cannot wait for this,, said Doheny.

“I’m excited to be back fighting in my city,” said Conlan. “It was special in 2019, but I believe this year it will be even better as we haven’t had live events due to the pandemic. On 6 August, we will show Belfast is back.”

Top Rank chairman Bob Arum said: “This is a big test for Mick, as Doheny is a formidable foe who won’t be intimidated fighting in front of the partisan Belfast crowd. He wanted a Belfast fight, and I am thrilled that his loyal fans will get to see him in person once again.”

The fight will be televised live by ESPN+.