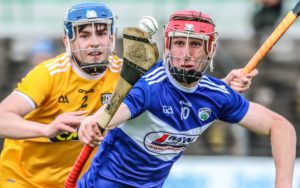 James Duggan was on target for Laois U/20s scoring two goals in the defeat of Antrim in Newbridge on Tuesday night             Photo: Paul Dargan

A WEEK earlier Laois conceded 4-27 and still won by six points. On Tuesday they travelled to Pairc Tailteann in Navan on Tuesday to take on Antrim who had hammered Down last week. Laois were favourites but after last week’s amazing game anything could happen. It did, Laois scored 4-27 this time and never looking like losing out.

After a nervous opening that saw both sides score two points each, a brace of Tadgh Cuddy frees matched by Ciaran Magill and Niall O’Connor, Laois settled into the game.

When Laois then scored two goals in as many minutes you felt this was going to be their night and stamped their authority on the game by the time of the first water break.

When a long delivery came back off the upright James Duggan was quickest to react and sent the sliotar to the back of the net, his fourth goal in two games.

By the time Antrim added their third point from Conor Bohill, Laois were leading 2-4 to 0-3. Their second goal came after Thep Fitzpatrick lofted a great ball in from midfield and Mark Hennessey flicked it over the full back and the ball dropped into the net.

Antrim might have had a goal immediately after the resumption but for a great block by the Laois keeper Lorcan Fitzpatrick. From the save the sliotar reached Mark Hennessy who picked out Gearoid Lynch and he rattled the net with a powerful shot.

Antrim replied with their fourth point from Declan McCloskey but Tadgh Cuddy hit a brace, then came the goal of the game. A neat move between two of last week’s heroes saw Mossy Burke race 20 metres before picking out James Duggan and although slightly off balance he pulled three feet off the ground giving the keeper no chance.

The same player added the next two points from play, followed by points from Pat Brennan and Tadgh Cuddy leaving the O’Moore’s in front 4-12 to 0-4 at half time.

Antrim seemed to have given up and in short space of time their entire full back line had picked up yellow cards and Tadgh Cuddy punished their misdemeanours. Indeed the third quarter was ragged and Antrim hit unbelievable bad wides. Laois added points from Mossy Keyes and Tadgh Cuddy, Antrim had one by Rhian McMullan leaving his side on 0-5 and Laois were now reading 4-18.

Laois selectors emptied their bench and it helped bring life back into the game. Eddie Critchley fired over two good points, Ciaran Byrne added another brace and Dan Delaney, although still carrying an injury, set up two points.

Fittingly the last two points came from players who got vital points last week, point number 26 coming from James Duggan while the last came from play when a perfect pass by Thep Fitzpatrick into Tadgh Cuddy brought his total to 14.

Last week after the euphoria died down the talk was of the poor defending by Laois. Well full marks to them in Navan where after a shaky ten minutes, they got it right and cleared the danger especially in the opening half when centre back Ciaran Burke was simply majestic.

We must point out Antrim were a disappointing outfit and once Laois hit them with two early goals the spark went out of them and but for their keeper it might have been much worse.

Next up Laois face Kilkenny in what will be a real test. But great credit to the management and players, when has a Laois hurling side put up a total of eight goals and 50 points in two championship games in any grade.

The standard at this level is levelling off as Wexford will testify after they were knocked out the same evening by Kildare.

We can now only hope that our seniors hurlers do half as well against the same opposition on Saturday.