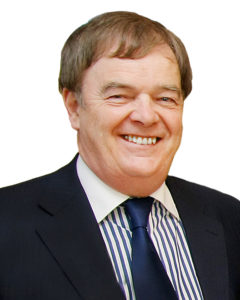 THERE was sadness and shock in Athy at the sudden and unexpected passing of well-regarded Athy solicitor Tos Quinn.

Local solicitor and former President of Kildare Bar Association, Frank Taaffe, said:  “The death of Tos Quinn, which occurred with painful suddenness, has caused widespread regret amongst his solicitor colleagues and members of the Bar.

Tos’s courteous manner made him one of the most popular Solicitors in the county, but his was not a popularity that prevented him from fearlessly promoting his clients’ best interests. He pursued the justice of his clients’ cases with vigor, but at all times with honesty and without any hint of deception.    His integrity was acknowledged by all of his colleagues.  He will be sadly missed.’

“Following an education at Glenstal Abbey and UCD, Toss came to Athy in the mid-seventies to work for HG Donnelly and Sons, before moving to Tadhg Brennan, and then taking over that practice when Tadhg was made County Registrar.”

“He was an uileann piper of some note,” said Frank, “and was very proud to own the pipes of 1916 revolutionary Eamonn Ceannt”.

“It’s quite extraordinary but for the last 40 years he spearheaded the trad night in Clancy’s Bar in the town every Thursday night.

“Himself and Seamus Byrne was the other piper, and they attracted all sorts of musicians there. He was an excellent piper,” said Frank.

Adding to the tributes, local solicitor Seamus Taaffe, said: “He was a fantastic colleague, an ultimate gentleman and you could trust his word.

He will be sorely missed by his legal colleagues, loyal staff, boating mates, cairde ceoil na hÉireann, and a wide circle of friends, all of whom he loved and cherished.

In accordance with government guidelines, the funeral may only be attended by 50 family and close friends. Funeral service on Thursday, July 22, in St. Michael’s Parish Church, Athy at 11am. Burial afterwards in St. Michael’s New Cemetery. Those who are unable to be present in the church can live stream, see link www.parishofathy.ie.

Tos’ funeral cortège will leave from his residence on Thursday morning at 10:30am on foot to St Michael’s Parish Church, Athy. For those who wish to show their respects along the route please do so in a safe and socially distanced manner. Family flowers only, donations, if desired, to the RNLI and/or the Society of St Vincent de Paul.