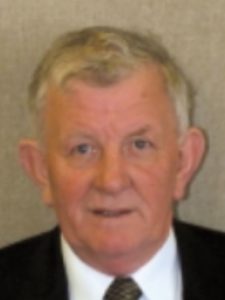 Tributes and condolences have been paid to the former public representative Martin Rohan who passed away on Tuesday 20 July.

It was with a deep sense of loss that friends and families heard of the passing of one their beloved who had died unexpectedly.

Martin, or Marty as he was fondly known, passed away at the age of 88. He was a lifelong card holder of Fianna Fáil and elected to Laois County Council for the then Borris-in-Ossory/Mountmellick Electoral Area. He attained the highest position in the county the following year when he was elected Cathaoirleach of Laois County Council.

Marty was a trenchant activist for his area and was one of the leading campaigners during the campaign to retain Abbeyleix hospital.

Marty was also highly respected within the Fianna Fáil party in Laois and nationally.

Leading the condolences was the most senior member of the party in Laois, the Minister of State Department of Finance and local TD Seán Fleming who said: “Marty. A true gentleman who did outstanding work for all the people. May he Rest In Peace.”

The chairman of the Laois Fianna Fáil party, on behalf of all its members, Joe Dunne said: “It is with great sadness that Laois Fianna Fáil has learnt of the death of Marty Rohan. Marty was a much loved and respected member of the party here in Laois for many years.

“Marty’s long service as an elected member on Laois County Council is still fondly recalled by our members and his many supporters to this day. His work on behalf of the people of Ballinakill and surrounding areas was immense and indeed his efforts to promote Laois were always to the fore.

“Marty was involved in many groups such as Friends of Laois Hospital and the action committee for Abbeyleix hospital. In all of these roles he brought great energy and passion to the work involved.

“In his retirement years Marty remained a great public campaigner and also a valued member of Fianna Fail. We pass on our deepest condolences to his family and many friends.”

“Marty represented his community in Ballinakill with diligence and pride for many years. Deepest sympathies and sincere condolences to his family on their sad loss.”

Martin was predeceased by his brother Paddy.

Due to current Government guidelines, a private family funeral will take place on Thursday 22 July at noon in Saint Brigid’s Church, Ballinakill and can be viewed on https://www.ballinakillknockparish.com/