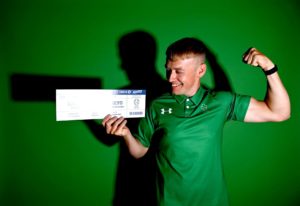 LAOIS will now have two Paralympians to cheer following Paralympics Ireland announcing the Para Cycling team that will represent Ireland at the Tokyo 2020 Paralympic Games.
Seven athletes have been selected for the team but from a Laois perspective the one we are interested in is Gary O’Reilly.
Gary will now join Portarlington’s Nicole Turner and this will be the first time ever that the county has had two athletes to cheer on at either the Olympic or Paralympic games.
Gary O’Reilly will be Ireland’s only hand cyclist at the Tokyo Games and he has hit form at the right time having claimed a brilliant fourth placed finish at the Para Cycling Road World Championships in Cascais last month. He came third in the time trial bringing home a bronze medal.
Gary’s two events in Tokyo will take place on the road as he competes in the Time Trial and Road Race.
And the Laois Nationalist caught up with Gary today and had a few words with him before he flies out tomorrow for 10 days training in Portugal.
“I’m absolutely delighted to have been selected and to get the chance to represent my country,” he said.
“This is a bit of pay back for all the hard work,” he chuckled. “But then that hard work is was its all about.”
Gary explained that he basically knew he would be travelling to Tokyo after his performances at the Para Cycling Road World Championships as it was one of the qualifying events.
“But even still, it was just so exciting to see the announcement today,” he added
A life changing workplace accident in 2014 when Gary fell from a forklift and shattered three vertebrae back, left him paralysed from the waist down. He duly underwent severe operations which involved having rods placed in his back.
There followed a year doing intensive rehab and physiotherapy. But now all that hard work has paid off for the Portlaoise man who now lives in Ballyfin.
After a time Gary turned his attention to sport as a way forward in his life. He dabbled in wheelchair basketball and rugby but once he tried out paracycling he knew what he wanted to do.
His discipline is hand-cycling and that ranges from H1 to H5, H1 being the highest level of disability, while Gary competes at H5 level.
Speaking about the announcement of the Para Cycling team that will represent Ireland in Tokyo, Chef de Mission, Neasa Russell said ‘We are delighted to announce such a strong Para Cycling squad for the Paralympic Games. Our seven athletes will all have a very strong chance of recording some memorable performances at the Games both on the Track and Road competitions. The team will depart tomorrow (Tuesday) for their training camp and I just want to wish them the very best when we next see them in Tokyo.”