Tom Cox: The Dunnes of Brittas 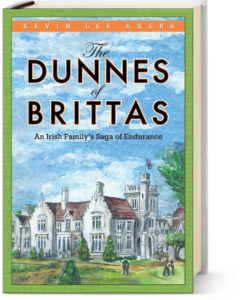 The front cover of The Dunnes of Brittas 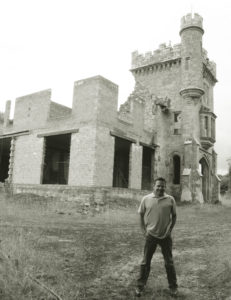 Author of  The Dunnes of Brittas, Kevin Lee Akers

AS any regular reader of this column will know, from time to time I can get stuck in a historical rut. And some ruts are deeper than others. Almost seven years ago, around October 2014, I couldn’t seem to shake off the Dunnes of Brittas for love nor money.

I had gotten into a Dunnes of Brittas rut simply enough. Researching a completely unrelated subject, I came across a firm of Dublin architects, Millar & Symes, and I couldn’t resist seeking out a Laois connection. As it turns out, I got more than I bargained for.

I firstly discovered they had designed the Bank of Ireland building in Mountmellick. I then came across an earlier commission from Capt Dunne, justice of the peace of Brittas, for a farm office, gate lodge and gate entrance to Brittas House. The rut deepened when I further discovered a commission in 1879, probably from Edward Meadows Dunne, for a new mansion at Brittas, at a cost of £7,700. That should have been that, but as ruts go, this one just seemed to get deeper and deeper.

October 2014 was also the month my other half and I celebrated our 35th wedding anniversary. That celebration saw us in the Cavendish Hotel in London for a weekend stay. Posh is hardly an adequate description. As my other half was reluctantly dismantling a pair of bath towels, which had been fashioned into the shape of swans, I picked up a booklet from the bedside table on the history of the hotel.

Famously, Rosa Lewis, around whose life ***The Duchess of Duke Street*** TV series of the 1970s is based, owned the hotel for a time, but not until the early 20th century. For much of the 19th century, The Cavendish was a favoured haunt of the Irish aristocracy, a number of them taking rooms there. Staring out of the pages of this slim volume was General Francis Plunkett Dunne, often jokingly referred to as The Honourable Member for the Army (such was his zeal in pursuing matters military in parliament). Francis Plunkett Dunne, who was born in Brittas House in 1801 and died there in 1874, couldn’t even give me peace to enjoy our lavish, though somewhat shorter stay than his, at The Cavendish.

I eventually managed to give the Dunnes of Brittas the slip, or so I thought. But now, seven years later and by a circuitous route, they’re back. What’s more, they seem to have multiplied. My great grandmother, a Clare woman, used to say of situations of this nature: ‘Tis what’s for a person.’ It’s your fate.

And I’m inclined to believe that the hand of fate was surely at work when, in the closing days of May gone by, I received an email from Kevin Lee Akers of Petaluma, California. Up to that moment, I had not heard of Kevin, nor, indeed, of Petaluma. California, I grant you, I had heard of, but I have never been. The only other reference which rang a loud bell was ***The Dunnes of Brittas***, which I now know to be the title of Kevin’s recently published first novel. Kevin, to be fair, was blissfully unaware of my long-running tussles with the Dunnes of Brittas, and the man who pointed Kevin in my direction merely described me as a historian who might be interested in writing an article about his book. A couple of emails later, a copy of Kevin Lee Akers’ first novel was making its way from Petaluma, California via the more traditional snail mail. It must have been a pretty nifty snail, though, because the book landed less than a week later.

***The Dunnes of Brittas, An Irish Family’s Saga of Endurance***, to give the book its full title, was a godsend, even before I opened the illustrated cover. Extended lockdown had all but exhausted my reading reserves. I was also intrigued at the idea of getting reacquainted with those of the Dunnes of Brittas with whom I had tussled in the past. This latter expectation was quickly and properly dispelled by a very clear statement at the outset that this is a work of fiction, and all the characters, with the exception of some well-known historical figures, were products of the author’s imagination. I took a certain comfort, though, when I did come across my old friend Francis Plunkett Dunne, though he was not yet a major general, and more often referred to as Frank. That took a bit of getting used to.

So how does a designer and illustrator from Petaluma, California end up writing an historical novel based in midlands Ireland? Historical connections are at the root of this flight of fancy, and family letters of the author’s aunt Lucy provided the inspiration and fuelled the author’s passion for matters historical on both sides of the pond.

You can read this article in full in this week’s Laois Nationalist, on sale from tomorrow in all local stores or online.

Filed under: The Dunnes of Brittas