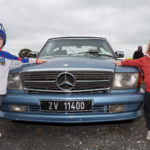 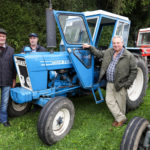 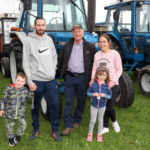 Dominic and Noah Lambe with Peter, Maura and Sadie O’Connor 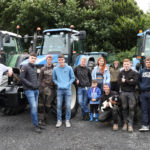 And while the sun may not have been shining, the same cannot be said for the cars, tractors and trucks that had been washed and buffed within an inch of their bonnets for this annual event.

In total, 63 tractors, ten cars and one truck headed off in different directions before meeting up at Portlaoise Civic Plaza, which was the halfway point. The convoy then made its way back to the starting point in Raheen.

Each year, the organisers select a different charity to benefit from the vintage road run and this year was no exception, with the charity of choice being the worthy Laois Teac Tom centre for suicide prevention.

While the total amount made from this year’s event has yet to be tallied, if you would like to make a donation, it’s not to late. If you would like to boost the coffers, then you can contact Chris Goode on 087 7691972 or Eddie Moffitt on 085 7648090 … they will be delighted to hear from you.

See lots more photos from this event in next week’s Laois Nationalist newspaper, on sale in all local stores and online from Tuesday next, 17 August.