Is this the last straw? Bales fall off the back of a truck outside Portlaoise Retail Park! 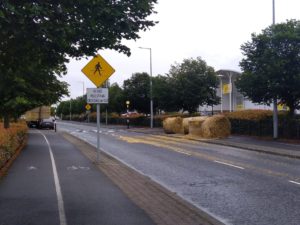 Large bales of straw fell off the back of a trailer outside the Portlaoise Retail Park, this morning

Bales of hay and straw are becoming a common sight in the middle of the road– and footpaths – after a number of reported incidents in recent weeks.

Less than two weeks ago a truck carrying an unsecured load of bales shed its load onto a road just outside Portlaoise. The incident occurred as local gardaí were dealing with a fatal car crash that had just occurred on the M7/M8 junction.

A similar incident occurred on the busy M7 Motorway on August 7th at Rathcoole after a truck carrying a load of bales collided with a flyover bridge. This incident caused major traffic chaos and caused long delays to frustrated motorists.

This morning’s incident happened outside Portlaoise Retail Park, which attracts hundreds of shoppers each day.

Laois/Offaly Gardaí are continuing to issue their warning: ‘Secure your load and if the load is too much have the cop on to split it and make another run”.

Filed under: Straw on footpath