Fr Paddy Byrne: Olympians proof that nothing is impossible 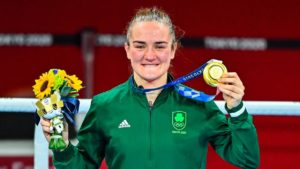 WILMA Rudolf is the absolute proof that nothing is impossible. Born prematurely, in a family of 21 children, with little to no resources to sustain a professional sports career, Wilma had to face even bigger challenges when she was stricken with polio. Not to mention this was the 1950s, which made things even more complicated. But she had a fire burning inside her, an unstoppable strength that nothing, not even polio or social barriers, could ever stop her.

The triumph can’t be had without the struggle – Wilma Rudolf.

By the time she was 12, she had overcome polio, started to walk again, to her doctors’ surprise, and took up athletics. Eight years later, she was already an Olympic champion.

Wilma defied all odds and won three gold medals at the summer Olympics in Rome in 1960.

Kellie Harrington wanted to put a smile on the nation’s face and she did. Her interviews were honest and very real. There was nothing robotic and artificial. She was lovely. She also remembered everyone – her family and neighbours, her workmates and her training team.

We couldn’t help but break into a smile. It wasn’t the colour of the medal, but rather the authenticity of the voice. I have no doubt her resilience, courage and humility will be an inspiration for future generations.

The Olympics has concluded and soon we welcome the para Olympics. That they happen at all is quite a miracle. It is a celebration of commitment and persistence. I read a few days ago of the work of many of the athletes’ families. The energy and cost and stamina is most impressive.

These families are an example of greatness. The fine-tuning of the skills by the athletes is admirable, but it highlights, too, that we are all Olympians. We arrive from God. We are loved into life. We are challenged to be the best we can be. We are unique. We have something different to offer life. There is no room for the moaners and the groaners. We are called to bring colour and light to the world. Laughter. Artistry. Beauty. Wonder. Miracle. Everyone has that within.

Watching the Olympics is a highlight every few years. Maybe you’re like me, captivated by athletes at the peak of physical excellence giving their all to win a medal and make their countries proud.

What we’re seeing this summer is the result of many years of athletes’ total dedication to their chosen sport. At this level, training is a full-time job and athletes rearrange their lives to accommodate it. They move to where the best training facilities are, they follow special diets, they wear appropriate gear. They religiously follow their coaches’ orders and they put up with the pain and strain of rigorous practice.

Olympic athletes’ entire lives narrow to the single objective of going for gold. This makes me wonder, should we as Christians be any less committed in our pursuit of Jesus?

In the New Testament, the apostle Paul – who surely knew about the ancient games in Olympia, Greece – compares following Christ to a race several times; 1 Corinthians 9:24-27 reads like an athletic playbook:

Do you not know that in a race all the runners run, but only one gets the prize? Run in such a way as to get the prize. Everyone who competes in the games goes into strict training. They do it to get a crown that will not last, but we do it to get a crown that will last forever. Therefore, I do not run like someone running aimlessly; I do not fight like a boxer beating the air. No, I strike a blow to my body and make it my slave so that after I have preached to others, I myself will not be disqualified for the prize.

The following prayer brings rich blessing on all involved in the Special Olympics we all look forward to.

As we begin this day of friendly competition, let us take a moment to pray.

Lord, watch over our athletes today.
Give them courage and confidence to do their best; Fill them with a spirit of fair play:
Make them gracious in winning;
Make them brave and proud in their attempts.
Give them the joy of Your Kingdom,
Where everyone’s gifts
Are honoured and celebrated.
Keep them safe and strong
Under your protective care.
We ask you this in the name of Jesus, the Lord. Amen.