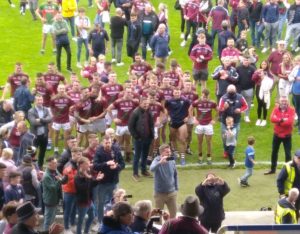 A storming first half display laid the foundation for a well deserved victory for Portarlington in MW Hire O’Moore Park this afternoon. It may have been a long time since they stared their championship campaign but it was well worth the wait in the end.

The game start with Graiguecullen holding possession after Michael

Hand won the throw-in. But they made little headway against a packed and resolute Portarlington defence as the conditions meant they had to work the ball in before shooting for scores.

However they did open the scoring when goalkeeper Danny Bolger struck a wonderful free from 40 metres out close to the stand with just over three minutes gone.

Colm Murphy’s free a minute later levelled affairs before Ronan Coffey edged Portarlington in front. Graiguecullen’s cause was not helped when Bobby Doyle was black carded in the seventh minute.

A Ross Hennessy mark had the sides together once again but Portarlington were to go on and control the rest of the half. Their dominance of midfield and ability to break at pace was causing untold problems for Graiguecullen.

They were to add four more points through Jake Foster (2), David Murphy and Jason Moore to leave them leading 0-6 to 0-2 at the water break.

On the resumption they continued to control the game as Colm Murphy (2 frees) and Adam Ryan added to their tally. With Ross Hennessy and Colm Murphy exchanging late frees Portarlington went into the half time break leading by seven, 0-10 to 0-3. The question was would that be enough when Graiguecullen would have the elements in their favour on the restart.

The Barrowsiders did look a little sharper on the restart but were shoot three shocking wides in the opening six minutes of the half.

On the other side of the coin Portarlington increased their tally by two, Jake Foster and Rioghan Murphy on target.

Ross Hennessy pulled back a point with a free for Graiguecullen in the 41st minute but they were stunned minutes later.

Graiguecullen’s Trevor Collins came out to intercept a long delivery but fumbled and dropped the ball. The inrushing Portarlington wing back Stuart gathered the ball and drilled it under Danny Bolger.

With the gap out to 13 points approaching the second water break there would be no way back for Graiguecullen.

Both sides would score three points apiece between that and the final whistle as Graiguecullen came no where near scoring a badly needed goal.

In the end there was no denying Portarlington were deserving winners and Sunday was their Lucky 13 day.

Full report and reaction in Tuesday’s edition of the Laois Nationalist.