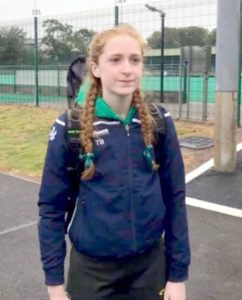 A LAOIS hockey player has been selected for Leinster in their upcoming Women’s National Development Under-23/21 competition being played in August. Leinster are limited to six under-21 players in each match against other provinces this weekend at Abbotstown.

Tory Byrne from Portlaoise and member of Abbeyleix Junior hockey club is one of the six under-21 players selected and the only player from outside of Dublin. Tory won West Leinster league play-offs with Abbeyleix on two occasions at U/16 level and just missed out on cup success with a 3-2 loss to Wexford in semi final in March 2020, the last match played since disruption in underage hockey due to pandemic.

Tory has also won numerous honours with Villiers Secondary School in Limerick as well as being part of South East Interprovincial squads over last three years.

Tory is the latest in a growing list of Abbeyleix players including Daniel Brain, Rachel Fitzpatrick, Emily Brain, Penny Conroy and Molly Finlay, who have been involved with provincial and development squads. Daniel and Rachel are looking forward to new season with Kilkenny men’s and Naas ladies’ first senior teams. A number of players have also gone on to play with Portlaoise ladies.

Johnny Walsh Chairman of Abbeyleix Club was delighted for Tory saying: “A great honour for Tory and for Abbeyleix club, and its also an exciting in time for hockey in Laois”.