Another personal best for Nicole Turner 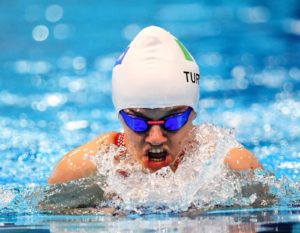 THERE may not have been a medal for Nicole Turner in the final of the S6 50 metre freestyle but the Portarlington teenager swam another personal best time of 35:26. Amazingly this was Nicole’s second PB of the day having already done so in the heats of the 50 metre freestyle.

And we must remember that this is not her favourites event.

Speaking on RTE after the race Nicole said: “I’m being hard on myself if I say I would have liked to go a bit faster but it was about a quarter of a second faster than this morning, so it’s another PB. I am really happy.

After today, Nicole will go on to compete in two further events.

The 19 year-old has two further events over the coming days. She will be back in action on Saturday for the 100m breaststroke. The heats will commence 1.07am on Saturday morning followed by a potential final at 9.07am.

Two days later on Monday, Nicole will be in action in her favourite event, the 50 metre Butterfly. The race at 1.42am will be televised by RTE with hopefully a final appearance for Nicole at 9.57am.