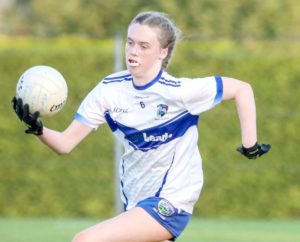 Graiguecullen’s Georgina Donovan played a real captain’s role as Laois got the better of Louth in the Leinster final                   Photo: Paul Dargan

WHEN these two sides met two weeks ago in the opening round of the championship Louth headed home from Ratheniska having handed the home side a 14 point trouncing.

Fast forward 14 days and when the pair met again, this time in the Leinster final, Laois not just overturned that 14 point defeat but emerged victorious by 10 points, an astonishing 24 point turn around.

From the moment Laois got off to an ideal start, Aishling Fitzpatrick finding the back of the Louth net, they were never headed.

By the first water break Louth had clawed their way back into the game and only trailed by a point. By half time Laois had extended their lead to four points, 1-5 to 0-4.

A Kelly O’Neill penalty saw Laois got six in front midway through the third quarter but a Louth goal had the gap back to four at the second water break. This was astonishing as for most of this period Laois were down to 14 players after Fitzpatrick was harshly sin-binned.

But just before the second water break Louth struck for a goal and could easily have had two or three more but each time elected to take a point. The gap was back to a goal and the pressure was on Laois as Louth were now playing with confidence.

During the water break Laois manager Martina Phelan settled her players and they went on to control the final quarter when two goals in the space four minutes ensured the title a son it’s way to Laois well before the final whistle.

Full report in next week’s edition of the Laois Nationalist