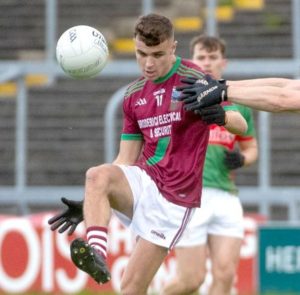 DESPITE making seven changes to the team that captured the 2020 senior title ten days ago, Portarlington showed their strength in depth when they held off a late Portlaoise rally to win this year’s ACFL Division 1A title in O’Moore Park on Tuesday evening. On the evidence of this performance the rest of those contesting this year’s senior championship have been warned.

Until deep into the second half Portarlington had held the upper hand. At the first water break they were 1-3 to 0-2 ahead and by half time they had an eight point cushion, leading 2-5 to 0-3.

But on the change over Portlaoise gradually clawed their way back into the game and by the second water break had closed the gap to three points, 2-7 to 1-7. A foul on Kieran Lillis five minutes from time handed Paul Cahillane the opportunity to level the game which he duly did.

But there was time for one last twist when Colm Murphy was fouled leaving Ronan Coffey with a simple tap over for the league clincher.

That said, Portlaoise had two late chances to send the game to extra time but efforts from Kieran Lillis and Gareth Dillon were wide of target and this inaccuracy was to be Portlaoise’s downfall on the night as they shot 16 wides while Portarlington show just two.