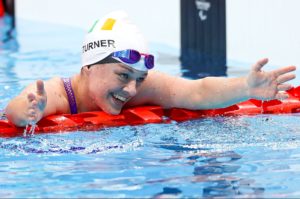 Nicole Turner cannot hide her delight after winning a silver medal in the 50m butterfly at the Tokyo Paralympic Games Photo: INPHO/Tommy Dickson

Nicole Turner – Paralympic silver medallist. It has a nice ring to it, hasn’t it.

So it is hardly surprising that Nicole described winning her first Paralympic medal as the ‘best day of my life’ when speaking to RTE’s Eamon Horan shortly after her swim.

Forever modest, the Portarlington teenager played down her exploits, saying she did not expect to do as well as she did.

“I aimed high but to be honest, to get onto the podium with the competitiveness out there, it hasn’t sunk in.”

But one thing Nicole was insistent on was that her success in not just down to her but to all those who have helped her along the way, including her parent Bernie and Jason, and she acknowledged this.

“I’m going to name four people. My coach Dave Malone has given up any hour of the day, all sorts of days to train me. My S&C coach Niamh Buffini took me one on one for the past two years.

“My dad has a full-time job, but my mam drives me to and from training every day. Without her I wouldn’t be standing here today.

“It feels like a dream come true. This is honestly the best day of my life. It’s for everyone at home. It’s not for me.”

And thankfully Portarlington photographer Michael Scully was on hand to watch and to capture the joy and excitement at Nicole’s race as she was roared home.

Her father Jason said: “We’re incredibly proud of her. A medal of any colour is amazing – and silver is out of this world. To do that against that field was absolutely fantastic.

“I want to give some recognition beyond the family too. The support Nicole has received from the community here has been brilliant. So many people have supported her from the age of seven when she reached the national development squad.

“There are a lot of people who have contributed to this success and long may it last. She is only 19 and Paris is only three years away.”

Her mother Bernie said: “I’m very emotional and I don’t mean to cry but this is five years in the making. She gave up her education. We drive to Dublin every day and we have our routine. I’m the happiest woman in Ireland right now.”

Nicole produced a fantastic swim in the S6 50m butterfly final to finish second to China’s Yuyan Jiang, in a time of 36.30 seconds. Turner pipped the USA’s Elizabeth Marks for second spot.

This was Nicole’s third final appearance in Tokyo. Last Saturday, she finished seventh in the 100m breaststroke final and on Wednesday, while not in the medals she set yet another PB in the final of the S6 50 metre freestyle.