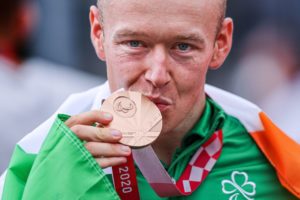 Portlaoise’s Gary OReilly with the bronze medal he won in the Men’s H5 Time Trial at the Tokyo Paralympic Games Photo: INPHO/Tommy Dickson

In the early hours of this morning, in his first ever event at his first ever Paralympics, Portlaoise hand-cyclist Gary O’Reilly put in a stunning performance to win bronze in the men’s H5 time trial at the Fuji International Speedway, three laps of the 8km track.

Gary finished in 39:36.46 to take third place in a hard fought event around the famous motor racing circuit despite the high temperature and ridiculous humidity.

It was a difficult race with the early stages of the Time Trial seeing Gary lose time as the splits came in but he worked through each pedal revolution and clawed back onto the podium as the kilometres ticked by.

After the race Gary said “I’m completely shocked to be honest – didn’t expect to get the medal. I’m just absolutely delighted.

“I am so happy to have done it for everyone at home, I did for them. All my family, my wife Hazel, are up watching it, I’m sure they’re as happy as I am.

“I think I was 20 seconds down on podium on the first lap but I had Neill (Delahaye, coach) in my ear telling me to stick to the plan. I realised we just needed to stay with the plan, I came back up on time then with the second lap, started putting time into them. Thankfully it worked,” he said.

Looking in on the race on television it was impossible to conceive the conditions under which the cyclists were performing.

Gary explained: “There are really difficult conditions here, push through our (heart and power) zones and then recover on the downhill.

“The climate might have caught people out, it is very humid and hot. It was all about a real pacing strategy race today so that you don’t burn up too quickly.”

While winning a Paralympic medal is a huge achievement and highly satisfying, it is not always easy going.

“As my friends all know, I don’t get to spend as much time with them, like when they’re going out for a pint.

“You don’t get to go out so you spend a lot of time in the room at home alone for four or five hours on a turbo trainer. It is all worth it on a day like today,” he said.

And it is not all over for Gary yet. He will be in action in the H5 road race tomorrow morning (1.30am-3.40pm) and all he wants now is recover as he goes in hunt of as second medal.

“Just want to go in and try and recover as best I can. We’re up early in the morning, so I’ll try and stick with it and do my best and see what happens at the end of the race.