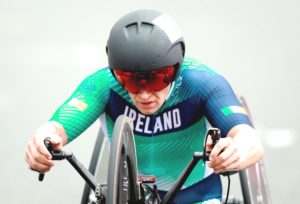 Just 17 seconds separated hand-cyclist Gary O’Reilly and a second Paralympic medal in the 72km H5 Road Race in Tokyo in early hours of this morning.

This was an amazing performance by the Portlaoise cyclist who just 24 hours earlier had completed the 8km Time Trial where he took the bronze medal.

In today’s race Gary just missed out on another medal when he finished fourth in a time of 2:24:57.

It left him 27 seconds off winner Mitch Alize of the Netherlands who was credited with the same time as second placed Loic Vergnaud from France. The gold went to Alize while this was the second silver medal for Vergnaud.

Another Dutch rider Tim de Vries took the bronze medal with O’Reilly 17 seconds back down the road.

The Portlaoise cyclist had to really dig deep in the closing stages to hold off the determined challenge from the USA’s Alfredo de los Santos.

Speaking after the race Gary said: “I’m chuffed about the Games as a whole.

“I think fourth today was the best result I could have hoped for to be honest. With the medal yesterday, I’m still struggling to believe that happened, so I think all in all it’s job done.

“I couldn’t be happier.”

The fact that Gary was even participating in Tokyo is astonishing in itself in so far as he readily admits himself that up to a few years ago he had no real interest in sport.

However, Gary’s life changed dramatically after he shattered three vertebrae in his back in a work-place accident in 2014 leaving him paralysed from the waist down.

He duly underwent several operations which involved having rods placed in his back. There followed a year doing intensive rehab and physiotherapy. But now all that hard work has paid off for the Portlaoise man who now lives in Ballyfin.

Initially Gary’s first entry into sporting activities was to take part in wheelchair rugby and basketball.

He subsequently decided to try out hand-cycling and took to it immediately and his progress has astounded everyone, himself included.

In Portugal he won a bronze medal in the Time Trial and was fourth in the Road Race.

There had also been other benefits from Gary’s hand-cycling. His training and exercise regime has had health benefits in so far as now walk with the aid of crutches and only uses his wheelchair for long distances.