Inexperienced Portlaoise side hold out against Clondalkin 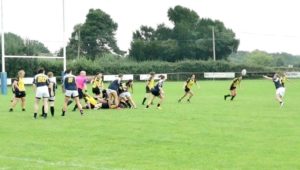 Portlaoise spread the ball wide against Clondalkin on Sunday

THE Portlaoise Senior Women’s team finally kicked off the 2021/’22 season with a five-point victory over Clondalkin RFC in the Paul Cusack Cup at Togher on Sunday.

On a dry, warm afternoon, two equally matched teams produced an absorbing contest with the result in the balance up to the final minutes. Portlaoise, unbeaten in their much-truncated season pre-Covid, started the brighter and achieved a certain amount of dominance up front through abrasive forward play and strong running in the backs.

Early on Portlaoise forced Clondalkin unto the defensive from strong rucking and through a very dominant scrum. Indeed it was tight head prop Rosie Palmer who opened the scoring with a try for Portlaoise after 12 minutes.

At this stage the Portlaoise pack were dominant in the loose and following several quick rucks and with good hands Palmer crashed over the line close to the Clondalkin posts, a try which was duly converted by winger Jenny Keegan to give Portlaoise a well-deserved seven point lead.

After the restart the game continued with Portlaoise in the ascendancy and Clondalkin were unable to get out of their half of the pitch. Twenty-five minutes into the half Portlaoise were awarded a penalty inside the Clondalkin half. Hooker, Robyn Mullins tapped quickly and carried strongly into the heart of the Clondalkin pack. Excellent rucking from the pack was followed by quick hands in the backline which released Rachel Palmer into space on the touchline about 30 yards from the Clondalkin tryline. The left winger showed great speed as she beat the cover and evaded several tackles to touch down for a try that was unconverted just on the stroke of half time leaving Portlaoise leading 12-0.

Clondalkin reorganised at half time and turned the tables on Portlaoise. Now it was the home side that were camped in their 22 defending their tryline.

Clondalkin managed to gain equality in the scrums and with the lineout a bit of a lottery the second half turned into a real arm wrestle with the Clondalkin scrum half launching their big runners from good ruck ball only to be met with resolute defence from the Portlaoise team.

Most of the second half was played between the half way line and the Portlaoise 22 metre line with Clondalkin launching wave after wave of attack at the Portlaoise defence which held firm.

However, as the pressure mounted the Portlaoise discipline slipped and despite several warnings about high tackles players continued to tackle high and eventually it caught up with them.

With three minutes plus injury time remaining the Portlaoise defence was stretched to the limit and conceded a penalty on their 22 metre line. The Clondalkin number 9 tapped quickly and ran in under the posts untouched for a try which was duly converted.

Overall Portlaoise were the better team – a little more organised in both defence and attack and they deserved the win. The front row played well and dominated at scrum time for much of the game. Sandy Keegan, playing scrum half in her first rugby match, was efficient and calm in everything she did and showed considerable promise in this position.

Player of the game was Rebecca Mullins who was consistently strong in the tackle and at ruck time. She ran well with ball in hand and her decision making was excellent.

Remarkably, Portlaoise had girls playing their first ever matches at second row, scrum half, prop, centre and wing and they still managed to produce a strong organised performance.

Next week they travel to Wexford to take on Enniscorthy.