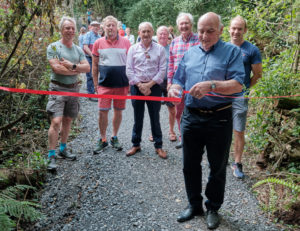 A WONDERFUL community asset just got a lot more enjoyable thanks to a funding and investment boost.

The beautiful 400m looped walk at Killeshin Waterworks Amenity Park had its official opening recently and now offers an enhanced walking experience for the many people who use it.

“The looped walk is in existence years, but we received funding from Laois County Council and we were able to extend the route of the walk,” explained Pauric Bolton of the Killeshin Waterworks committee.

“It’s very popular, so we now want to promote it and encourage people to come because it such a nice place to visit,” he added.

The official opening was performed by local man Pat Kinsella, whose late father John was the last caretaker of Killeshin Waterworks and actually lived in ‘waterworks house’ at the site. Back in 2011, Pat’s late mother Elizabeth opened a previous section of Killeshin Waterworks Amenity Park, so it was fitting that Pat cut the ribbon on this latest phase of the amenity park’s development.

Fr John Dunphy officially blessed the new walkway and the event was delighted to welcome along lots of keen, enthusiastic walkers to test the new facilities!

The old Killeshin Waterworks reservoir was built in 1894 for supplying water to Carlow town. In September 1987, Carlow UDC ceased using the reservoir following the introduction of the Carlow North Regional Supply scheme from Rathvilly. For a short while, Laois County Council used water from Killeshin, but has not done so for the past two decades.

In 2011, Laois County Council entered into a licence agreement with landowners Carlow Town Council to use the land as an amenity park and the site has flourished since. Biodiversity and heritage reports have also been done on the park in recent years.

“Pat’s brother Andy has created an interactive guide of the waterworks and there’s a QR code there that people can scan with their smartphone and get all the information about the place,” explained Pauric.

“We also had Killeshin First Responders there for our official opening … yeah, it was a great success,” added Pauric.

New more photos from this event in next week’s Laois Nationalist, on sale Tuesday in all local stores or online.

Filed under: Killeshin gets a new walk