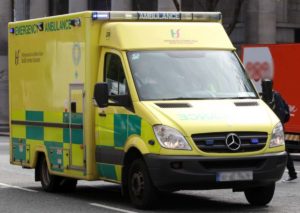 FOR the second successive week, injured footballers in Portlaoise had to be driven to hospital in cars after ambulances failed to attend the scene.

The latest incident occurred on Saturday afternoon, 11 September, when an under-14 player from Portlaoise AFC was injured during a game at Rossleighan Park.

Despite calling an ambulance at 1.45am, none arrived, and the youngster’s parents had to transport their son to Tullamore hospital with a broken arm.

Club chairman Mick Coleman said: “I was in the park and was called across to the incident, where the lad had fallen awkwardly. A number of us, along with the boy’s father, accessed the injury and decided to phone an ambulance.

“I phoned 999 at 1.45pm and spoke to an ambulance control operator and told her what had happened, that we thought the lad had broken his arm. She told us not to move him and that she would get an ambulance to us. I asked her what time we could expect it to arrive and was told she couldn’t say. I gave her my mobile phone number and asked her to phone me back when she had an estimated time. We waited around and none arrived. About an hour later, the boy’s parents decided to bring him to Tullamore hospital in their own car.”

Asked by the Laois Nationalist why the player had not been brought to the nearby Portlaoise hospital, Mr Coleman said: “It was clear by looking at it that the arm was broken. If we had taken him to Portlaoise hospital, he would have been advised to go to Tullamore hospital, where they deal with broken bones.”

Mr Coleman said that the boy’s arm was operated on on Saturday night and the following day had another operation on it and was now home recovering.

“This is not the first time that an ambulance had not turned up for an emergency at the park. The previous weekend during an under-18 women’s game between Portlaoise and Peamount, one of the away players received a serious injury. We rang for an ambulance. After waiting 30 minutes, we gave up and the player was brought to Tullamore hospital in a car.”

The club chairman told the Laois Nationalist that despite asking the ambulance control operator to phone him back on Saturday with an estimate of when the ambulance would arrive, he received no reply as we went to print.

“These two incidents,” said Mr Coleman, “are very worrying. What would happen if a player, coach or spectator fell seriously ill with a heart attack or something similar? Is it now the case that ambulances will not attend?”

He said that between eight to ten games are played in the park over the weekend and that all coaches are trained in basic first-aid techniques and are capable of dealing with minor injuries.

In a post on its Facebook page, Portlaoise AFC wrote: “What has our ambulance service become that a young boy has to be left lying on a wet pitch for over an hour and asking when is the ambulance arriving?

“How long will more people have to put up with this service? What will it take to improve it? I wonder if it was a minister’s son, maybe then something might happen to improve the service?

“This is not a reflection of the people who work in the ambulance service. The government must take the blame yet again. But will they?”

They updated their post on Sunday evening to say: “Just an update on our very own ‘Braveheart’ aka Rocco O’Reilly – we are delighted that he is now home after surgery and wish him a speedy recovery.”

On Sunday night, the boy’s (Rocco O’Reilly) father wrote to thank all those who had assisted his son.

He said: “Rocco’s father here. I’d just like to thank the club for the support they have shown to Rocco since Saturday and especially the few that was by his side at pitch side that stayed with him was much appreciated and to his teammates that has been texting and video callin’ him Saturday and today has shown me how much of a great club he is involved in and support each outher and thanks for all the comments for him by all.”