People in Laois urged to get back in the saddle 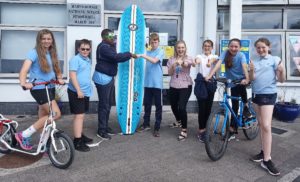 Pictured taking part during cycle week at Maryborough National School, Portlaoise were (l-r) Molly-Jane, Lee, Michael, Ryan, Teacher Seoda Fitzgerald, Zoe, Abbie and Megan with their message – ‘You might not be able to surf in Portlaoise, but you certainly can hop on your bike and get around and enjoy the freedom of two wheels.’ 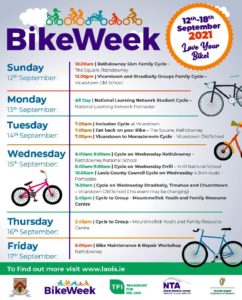 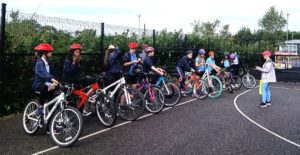 Some of the pupils from Maryborough National School, Portlaoise who took part in the National Bike Week.

CARBON reduction enthusiasts and bike skills’ aficionados at Maryborough National School, Portlaoise were out in force enjoying the last of the heat and summer sunshine last Wednesday morning ahead of National Bike Week which continues until Friday 17 September.

The pupils from fifth and six class were over the moon to take part in a Fun Bike Skills Session on the school ground campus at Summerhill.

The Green-Schools Officer Karen Moore and Lorraine Flanagan were thrilled with the turn out and the effort the school had gone to sourcing bikes for the morning.

Many of the pupils travel from further afield, so getting a bike to school on the bus would have been a tricky endeavour.

The pupils were quizzed on their knowledge of low carbon and were quick to mention that their school was one of the lucky few in the county to be awarded Safe Routes to School investment. Just One of 170 schools around Ireland to do so.

Many events are taking place over the coming week.

There is a National Learning Network Student Cycle taking place all day today Monday 13 September at their Centre on the Dublin Road in Portlaoise.

Then tomorrow Tuesday 14 September  there will be an Inclusion Cycle in Vicarstown, a Get back on your bike event in Rathdowney and a Vicarstown to Monasterevin cycle all beginning at 7pm.

On Wednesday 15 September from 8am to 9am both Errill and Rathdowney National School will hold a Cycle Wednesday.

Laois County Council will be holding a 4.3km cycle of Portlaoise beginning at 10am. Stradbally and Timahoe will also be holding a cycle round their areas beginning at 11am. Then at 2.45pm Mountmellick Youth and Family Resource Centre will hold a cycle.

The same group in Mountmellick will hold another cycle the following day Thursday 16 September from 2.45pm.

Then on Friday 17 September there will be a Bike Maintenance and Repair Workshop in Rathdowney at 6pm.