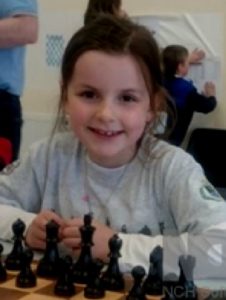 At nine-years of age Polly McCormick from Portarlington will be the youngest player to compete in this year’s Irish Women Chess Championship that is being held in the Killeshin Hotel, Dublin Road on Saturday and Sunday 18 and 19 September.

Some of Ireland’s top women and girls chess players in Ireland will gather in Portlaoise over the coming weekend to compete in the Irish Women Chess Championship.

The players range in age from nine-years old up to 84-years of age. The youngest of these is a Portarlington girl.

The championship event takes place in the Killeshin Hotel, Dublin Road on Saturday and Sunday 18 and 19 September.

While chess may be seen as a minority sport in Ireland some of those who play it are recognised worldwide as champion players on par with the best in the world.

Since the blockbuster TV series The Queen’s Gambit was shown last year there has been a huge influx of people of all ages to the sport. The President of Ireland Michael D. Higgins is Patron of the Irish Chess Union. Quite a number of people play chess in Laois.

Indeed Trisha Kanyamarala from Portlaoise was the first Women International Master of Ireland and would have been seen as red hot favourite to take this weekend’s title but for the fact that she and her brother Tarun are representing Ireland in the European chess club Championship taking place in Ohrid, North Macedonia from 18 to 25 September.

However, nine-year-old Polly McCormick from Portarlington will be flying the flag for Laois when she competes in the u-18s Irish Women Chess Championship.

Polly learned how to play chess when she was four years of age. She enjoyed the game at her club (Curragh), where she seemed keen to show that girls can play too and finds chess unique as a sport. She plays online, does tactics and attends chess camps.

Polly played in the online Rapid Girls European (U-12) and World (U-10) Championships this year. Her favourite player is Magnus Carlsen, but as her mother is Polish, Polly is also interested in Polish players such as Najdorf and Duda.

Numbers playing over the weekend are limited due to Covid-19 restrictions on gatherings.

This year will be a bit special because 84-year-old Irish American Elizabeth O’Shaughnessy from California will play in the championship in Portlaoise.

There will be cash prizes on offer for the winners.