The death has taken place of Laurence (Larry) McEvoy – Mountmellick 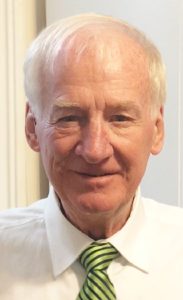 Funeral Mass for Larry will take place at noon (US time) on Saturday 18 September in the Church of Christ Our Saviour, 59 Park Ave, New York, NY 10016 United States.

Larry was raised in his family clothing shop and dairy. He attended Knockbeg College followed by seminary training at the Pontifical Irish College in Rome for some years. He then attended University College Dublin School of Agriculture. He began a duck hatchery in Mountmellick.

In his college years in Dublin he met his wife Judith Hearnden, whom he married in UCD Chapel in 1972.

On graduation he went to work at the United Nations Indonesian Mission as a speech writer from 1977 to 2002.

In 1974 he helped found the Irish Freedom Show (Irish Circle) on cable TV giving voice to the Irish civil rights movement with news, editorials, debate and interviews both political and cultural.

In the late 1970s he founded Celtic Productions which promoted and distributed documentaries of both the freedom struggle and realities in the north of Ireland, as well as Irish music and dance productions.

In 1978 he and Judy began their family. They moved to Bellerose, Queens, New York in 1982 to raise their four boys. They eventually moved back to Manhattan in 2015.

He took great pride in his roles as President, then Vice President with Mike Dunphy in the County Laois Association, every year unfurling their proud banner in the New York City St Patrick’s Day Parade.

Here too in the United Irish Counties he found himself early on speaking up for an inclusive parade for LGBTQ participation as well as standing tall as the first county association to participate in the St Paddy’s For All Parade in Queens New York.

In his last years he supported and advocated for Irish solidarity with the Black Lives Matter movement, including within the Ancient Order of Hibernians.