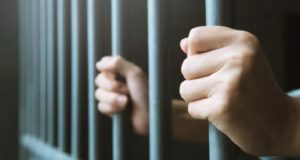 A man who is due for release from prison on 29 October appeared by video link at Portlaoise District Court last Thursday on a public order offence.

The man was charged with being intoxicated in public at Fallaghmore, Ballylinan on 8 October last, to which he pleaded guilty.

Garda Sergeant JJ Kirby said that gardaí came across the defendant at 12.55am that morning walking along the roadway, wearing dark clothing, highly intoxicated, unsteady on his feet and was arrested for his own safety.

He said the defendant had 38 previous convictions, many of these for thefts and drug related.

Judge Bernadette Owens noted the last conviction imposed the man for a public order offence dated back to 2001.

She went on to strike out the charge against him.