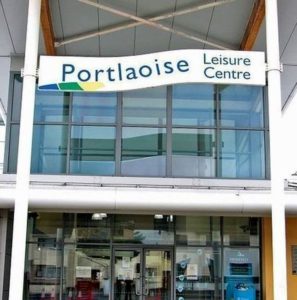 Questions were raised at the September meeting of councillors from the Portlaoise Municipal District over the reopening of Portlaoise Leisure Centre.

So incensed were councillors to the reply to their request for an update on the leisure centre from a council’s director of services that they unanimously agreed to send the reply “upstairs” to the council’s Chief Executive for his consideration.

Three councillors at today’s meeting (Wednesday 15 September) put down motions about the facility.

Cllr Willie Aird called on, “the Director of Services Donal Brennan and the Sports Officer Anne Marie Maher Maher to meet with members (councillors) of Portlaoise Municipal District at the leisure centre as soon as possible.”

Cllr Catherine Fitzgerald asked, “this council give an update on the re-opening of Portlaoise Leisure Centre?”

Cllr Thomasina Connell in her motion asked for an, “update in relation to the reopening of Portlaoise Leisure Centre to include a schedule of works completed to date and those which have yet to be completed?”

In his two page response to the three motions Mr Brennan provided a long detailed list of the works that had been undertaken and the schedule of works yet to be completed on the centre.

Mr Brennan set out in his written reply that: “The responsibility for the opening of the Portlaoise Leisure Centre lies with the licenced operator.

“I am given to understand that since the beginning of this month that the operator has appointed a general manager. The manager is in the process of taking over the required works to reopen the indoor aspects of the centre.”

Mr Brennan said: “Based on recent reports from the operator, a reopening date before November is not anticipated.

“This date is provisional and reopening is dependent on a number of factors which are outside of the control of the operator or Laois County Council.”

Cllr Aird fumed: “I submitted my motion in very good faith. I got a phone call to withdraw my motion. I didn’t and I won’t. We need to know what progress is taking place at the centre.”

Cllr Aird said: “He (Mr Brennan) asked me to withdraw the names from it and I didn’t. He is the man directly responsible for the centre and I won’t be withdrawing his name. We need to walk around the centre and see what needs to be done.”

Cllr Catherine Fitzgerald said: “I’m very, very disappointed with the answer to my motion. I spoke with Donal Brennan and he told me it would be the end of July when it would reopen, now we’re being told it might not even be in December.”

Cllr Fitzgerald demanded to know: “Who is the licenced operator? This is all new language to me. We’re elected members. If we get a reply with wording like that, then we should be told who the licenced operator is. To me the list is misleading. We want plain black and white answers. I’m totally shocked at his response. The leisure centre is a huge issue for the town of Portlaoise, the county and for the children of Laois. That response is less than helpful and an insult to us as the public’s representatives. I’d have no problem if we meet Mr Brennan in public (meeting).”

“Whatever about it being an insult to us (councillors), it is an insult to the people of Portlaoise and of Laois,” said cllr Connell.

She said: “Families were hoping to bring their children to the leisure centre during the summer school holidays. How can the Director of Services not be in a position to announce an opening date, even an approximate date?”

Cllr Noel Tuohy said a meeting should be held at the centre with councillors and Mr Brennan.

“I also want to know who is the licenced operator? I understood that Laois County Council was the licenced operator. The response is very disrespectful. People in the community have difficulty understanding why the facility is not reopened. I was told it would be reopened by September,” she said.

Leas cathaoirleach of the district council cllr John Joe Fennelly said that he too was of the understanding that the centre would be reopened by September.

Cllr Aird said: “The reply to us doesn’t say it is opening in November.”

Cllr Connell said “How can a Director of Service not provide an opening date or even a vague opening date? On any other project by Laois County Council there is a proposed date. This is unacceptable.”

Councillors agreed to raise the issue as a matter of urgency with council Chief Executive John Mulholland.

It was also agreed that a text would be sent during the course of the meeting directly to to Mr Brennan asking who is the licenced operator? Councillors were informed that they should get a reply to that question before the conclusion of the meeting. None was forthcoming.

At the May council meeting the Chief Executive of Laois County Council John Mullholland announced that he expected Portlaoise Leisure Centre to reopen by mid-July.

The same meeting heard that Portarlington Leisure Centre was taking over the management of the centre in Portlaoise, and that staff would be shared and paid-up members would be able to use either facility.

It was also announced that the board of directors in Portarlington had agreed to the council’s request to reopen and manage the Portlaoise centre, which went into liquidation last year.

The Chief Executive told the meeting that the licence was issued to Portarlington Leisure Centre and Portarlington manager Seán Quirke would manage both facilities.

He told that meeting: “This is a positive development. We said at the outset that we would not envisage assigning it to a private company and we wanted a voluntary company to do it.”