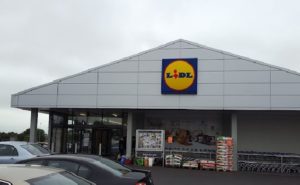 Lidl Ireland has been granted final planning permission to knock and rebuild its store at James Fintan Lalor Avenue, Portlaoise.

The redevelopment will see a €9 million investment in the local area alongside the creation of seven new jobs when the store re-opens, adding to the existing team of 27. It is estimated that a100 further jobs will also be supported indirectly throughout the planning and development phases of the store

The existing store has been in place since 2000 and will be replaced with a larger and more modern model.

The new store will also be built to A1 energy standard and will optimise the building’s design, usage of materials and reduced energy consumption through use of energy systems such as solar PV panels, energy efficient heat pumps and LED lighting, which in turn, reduce green-house gas emissions.

Lidl Portlaoise Store Manager Ivars Zemvalds said: “We have been proudly serving the community of Portlaoise and its surrounding areas for 21 years. Our Portlaoise store was one of the first opened when Lidl came to Ireland in 2000. As a result, we have a really strong relationship with the community in Portlaoise and we are just over the moon to be bringing them a new and improved Lidl store that will enhance their shopping experience. The team and I are very much looking forward to opening our new store in due course.”